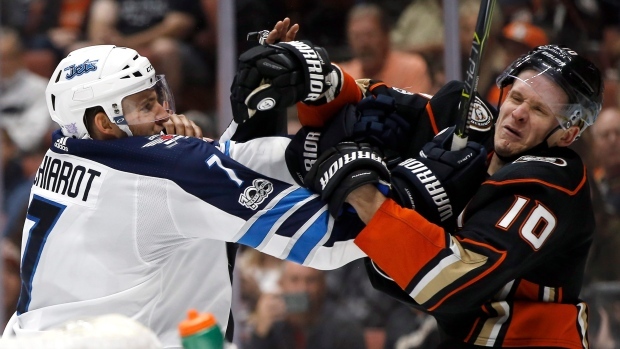 Jets’ defenceman Ben Chiarot was fined by the NHL for hitting Ducks’ forward Corey Perry in the jaw with the butt end of his stick. (Source: AP Photo/Alex Gallardo)

A local Winnipeg Jets fan is getting into the spirit of the season.

Kyle Klatt has started a GoFundMe page after an incident in the Winnipeg Jets-Anaheim Ducks game Friday afternoon.

Klatt is hoping to raise the same amount of money as the fine, with all the proceeds going toward the Christmas Cheer Board, a Winnipeg charity that provides food hampers and gifts to families in need during the holiday season. The money will be donated in Chiarot’s name.

Klatt said he noticed others on social media throwing around the idea of a GoFund Me page and decided to go for it.

"And then I thought, 'you know realistically I don't know how many people are going to shell out their money to pay off a hockey player's fine, but I thought we could use that number and put it towards some kind of charity," said Klatt.

He said the Christmas Cheer Board was the right fit at this time of year.

"You have hockey fans, you have charity and you have Christmas, at this time of year, and as Manitobans as a community I think we like to take care of our own at this time of year, people that don't have, you know maybe are falling a little bit short around Christmas time for their family, and I felt like it was a worthwhile cause really," he said.

The page was set up Saturday afternoon and had already raised exactly $3,000 as of late Sunday afternoon. You can donate to the cause here.

Perry has a reputation of getting under opponents’ skin and is not well received by fan bases of other teams.

During a 2015 first round playoff series between the Jets and Ducks, Jets fans famously chanted “Katy Perry” during the two games at the MTS Centre.