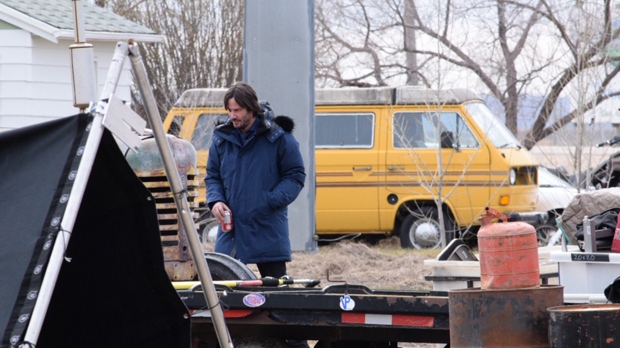 The star of The Matrix was in Marquette to shoot his latest movie. (Val Catellier)

In the small rural community of Marquette, Man., it isn't unusual to bump into your neighbors. But these days, residents are bumping into Hollywood star Keanu Reeves.

"I think he was using the bathroom," laughed Marquette resident Tayvia Dorge. "So we waited and got a photo with him."

Reeves wasn't just making a pit stop on the way to Los Angeles. The star of The Matrix and John Wick was in Marquette to shoot his latest movie Siberia.

"It's cool, you know?" said Marquette resident Lee McRae. "Keanu Reeves is pretty big star, you know what I mean? He's been in lots of blockbusters, so to have him come to middle of the nowhere Marquette is kind of a cool deal."

The small town has a cool role to play, quite literally. It's standing in for Siberia, the setting of the film.

That meant the town was transformed using some Hollywood magic. A Russian billboard went up, vehicles with Russian license plates are on set, and the exterior of Bonnie Lawrence's house underwent an extreme makeover, turning into a bit of a junkyard.

She said it's an exciting time, but a little overwhelming too “because all of a sudden it's an invasion.”

It will be a short-lived one. The lights, cameras and action will shift to another location in the coming days, leaving just memories of Hollywood for the people of Marquette.