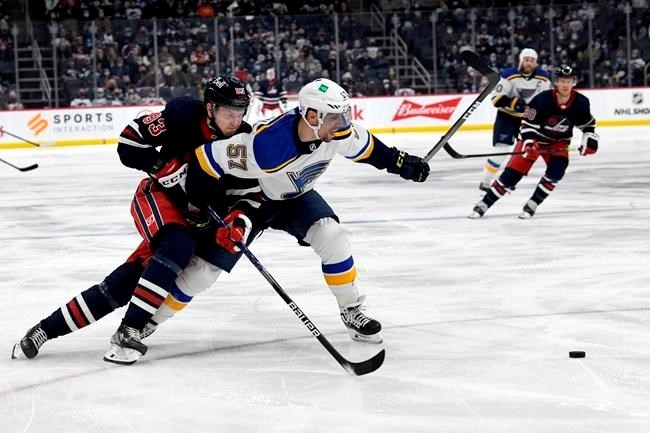 WINNIPEG -- Ryan O'Reilly scored the only goal in the shootout to give the St. Louis Blues a 3-2 victory over the Winnipeg Jets on Tuesday.

WINNIPEG -- Ryan O'Reilly scored the only goal in the shootout to give the St. Louis Blues a 3-2 victory over the Winnipeg Jets on Tuesday.

Eight skaters took shots in the contest, with O'Reilly deking and putting the puck behind Jets goalie Connor Hellebuyck.

Pavel Buchnevich had a goal and assist and Jordan Kyrou also scored for St. Louis (8-2-1). Kyle Connor, with his team-leading ninth goal, and defenceman Neal Pionk scored for Winnipeg (6-3-3).

Buchnevich set up Kyrou's game-tying goal at 11:54 of the third period when he sent the puck out to the front of the net for Kyrou, who beat Hellebuyck.

St. Louis had possession for most of overtime, outshooting Winnipeg 10-1, and Brandon Saad hit the post.

Hellebuyck made 31 saves for the Jets after missing the team's past three games. The first absence was for his son's birth, the next two because he was sick with a non-COVID illness.

Winnipeg was playing its fourth game of a season-long, seven-game homestand (2-1-1) at Canada Life Centre.

Both teams had a power play in the fast-paced first period, but only the Blues capitalized. Buchnevich scored his third of the season with a shot that went through Hellebuyck's legs at 18:09.

The Blues had the second-best power play in the NHL heading into the game at 30.8 per cent while Winnipeg was fourth (28.1).

Winnipeg outshot the visitors 17-5 in the second period, tied the game and had some good chances to take the lead.

Pionk did a spin move inside the blue line and then fired a shot that may have hit a player and went past a screened Binnington at 10:56.

A few minutes later, the netminder denied centre Mark Scheifele's close-in shot with his stick-side glove -- and his stick lying in front of him on the ice.

Winnipeg also had a second power play but only got one shot on net. Jets forward Dominic Toninato's wrap-around attempt was then foiled by a Blues player beside the net.

Shots on goal were 23-13 in favour of Winnipeg after the second period.

Connor fired a sharp-angled, high shot past Binnington at 6:22 of the third to give the Jets the 2-1 lead.

Jets captain Blake Wheeler assisted on the goal, giving him 700 points for the franchise. He has 810 points in his 14-year career.

Winnipeg, which is 4-1-1 at home this season, hosts San Jose on Thursday. St. Louis returns home to host Nashville the same night.

This report by The Canadian Press was first published Nov. 9, 2021.