Police help dig puppies out of tunnels on property near Rivers, Man. 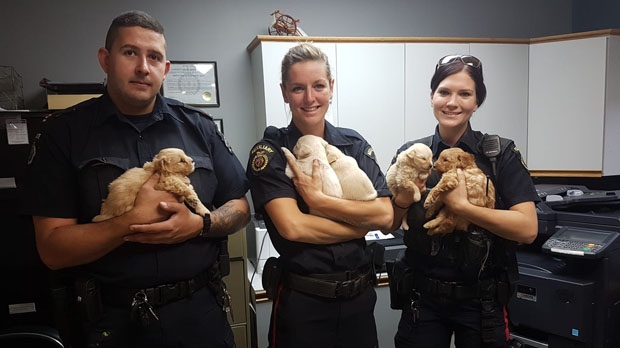 “Our members were more than willing to give a hand.” (Facebook/Rivers Police Service.)

Members of the Rivers Police Service got more than their hands dirty when a recent call led them to a batch of puppies that had gone missing in a system of underground tunnels.

On Wednesday the department shared photos of its members posing with the pups to its Facebook page along with the site of the rescue, including one of an officer reaching deeply, his head swallowed by the ground.

“Thankfully they got to them when they did,” said Tracy Munn, shelter manager for the Brandon Humane Society, which is now fostering the puppies.

Rivers police Chief Bob Futrell said officers had been called to a residence on a rural property just outside of town on an unrelated matter, and that’s when the homeowner asked for their help.

“They were approached by the homeowner indicating their dog had had puppies not too long ago, not even a month, and one had been located near a tunnel the mother had dug to nurse her puppies, and they couldn’t get to the puppies,” Futrell said.

“Our members were more than willing to give a hand.”

Futrell said digging out the dogs was “at least a two hour affair,” and that there were five in total. He said police worked with the Brandon Humane Society to get the puppies checked out by a vet.

“Pickles was the girl puppy, the rest were all males, and I believe she’s still being cared for because she was in not very good shape.”

“The one we were really concerned about, her eyes were sealed shut,” said Munn, adding it’s fortunate the pups were rescued when they were, as the female had a severe eye infection that needed antibiotics. She said she’s already shown signs of improvement.

“She was being vocal last night, and I understand she was eating, so that’s a good sign.”

Munn said the dogs are estimated to be about three and a half weeks old, and will be put up for adoption sometime after they reach eight weeks, receive shots and are assessed to be healthy. She said their photos will be posted to the shelter’s website before they’re ready to go home.

“People need to see how amazing cops can be,” she said.

Futrell said they were glad to be able to help.

“They’re feeling pretty good about being able to make a difference in that way.”