WINNIPEG – It’s not hard to describe a championship celebration.

"Amazing. What a turnout,” added quarterback Zach Collaros. “It was a lot of fun, man. What a city, what a fanbase. We're so happy we could bring the cup back for them."

As many as 10,000 fans turned out Tuesday afternoon to watch their team parade around downtown Winnipeg, before squeezing into a rally at the Forks. Winning a Grey Cup after 29-years of losing and officially ending the CFL’s longest active championship drought, has a different meaning for hometown player Nic Demski.

"I brought it back to Winnipeg man, like all of us,” he said. “You know this organization is great, top to bottom. I'm proud of everybody here, I'm proud of the city, and it feels amazing man."

"I knew it was going to be a great turnout, I knew the city was behind us the all the way. But to actually see it come to life, it meant the world to me."

An injury to Matt Nichols at the end of August saw the team start to stumble down the home stretch, after starting the season at a sizzling 7-2. Players took notice when their ability to reach the Grey Cup was doubted.

“People wrote us off midway through the year, as soon as Matt went down, they questioned what we'd be able to do,” said Bighill. “There's adversity no doubt, but that's what makes everything so special, is overcoming adversity, and the journey we got to get here, and you guys all witnessed it, it was something special."

"You know we came out and proved everybody wrong,” said receiver Kenny Lawler, who went shirtless for the length of the parade and rally, despite sub zero temperatures. “We had a four percent chance from the CFL going into the playoffs, but you know we believed. We were the only people that believed. Us, my teammates, you know we came in here and we fought, and that's what we did the whole playoff run, we just tried to prove everybody wrong. But the city of Winnipeg knew we were going to pull it off."

Sunday’s win over Hamilton gave the franchise their 11th Grey Cup, which ranks third all-time in CFL history. Only Toronto (17) and Edmonton (14) have won more. 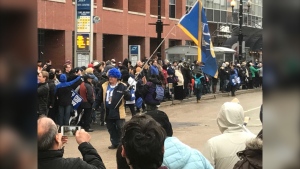