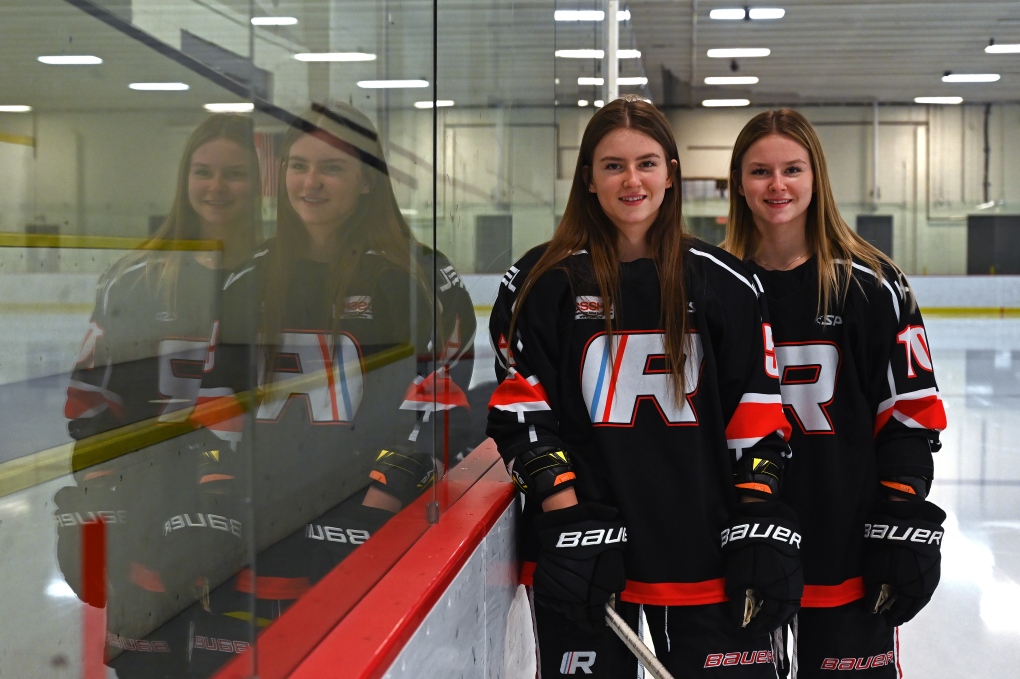 KELOWNA, B.C. --  Jordyn and Kyla Bear have something to say to the next Indigenous generation who want to follow in their footsteps in hockey -- they're only a phone call away.

The 17-year-old twins say it's the same support they got from Brigette Lacquette, the first Indigenous hockey player named to Canada's national women's hockey team in 2018.

The sisters, who grew up on the Ochapowace First Nation, about 100 kilometres south of Yorkton, Sask., have a promising future in the sport and dream of playing together at the Olympics.

They recently accepted scholarships to play Division 1 NCAA hockey with the Rochester Institute of Technology in New York. They plan to move there in time for the fall semester, depending on COVID-19 restrictions.

They are currently finishing their last year of high school in Kelowna, B.C., at the RINK Hockey Academy.

Although they spend months away from home, they say being together makes it easier.

"It's still difficult moving away, but having a built-in best friend and sister moving with you, it makes things less awkward with different people you meet," says Jordyn.

The sisters admit that they had opportunities that would have forced them in different directions, but they have been adamant about finishing their hockey careers together.

"It's easier to have someone go along with you and enjoy the ride, and at least you know someone in the locker room, or at least in the school," Kyla says.

The sisters credit much of their success to their family, particularly their older brothers Kirk and Josh, who also play hockey competitively.

"They want to see us do better in the world than anyone else," Jordyn says. "I would say they are both our hugest role models."

She and Kyla followed their brothers onto the ice rink at about age five.

"We were always trying to keep up with our brothers," Jordyn says. "We would be pushing chairs while they'd be zooming by us."

The twins played in their home minor hockey association in Ochapowace. They also played in Churchbridge and Whitewood, Sask., as well as with the Melville Prairie Fire midget AAA organization.

Shortly after, they went to B.C., where they played for the Okanagan Hockey Academy in Penticton before moving to Kelowna.

Their coach in Kelowna, Kris Hogg, says having the twins on the team has its advantages.

"The best part is Kyla is a defenceman and Jordyn is a forward, and they kind of bring the bench together as well," Hoggs says. "It's a cool dynamic."

He says the team has another set of twins, Annie and Jessie Burks from Idaho, which "might be the first time in hockey history." The four will also be at Rochester together next year.

Hoggs says having the two sets of twins face each other in an Olympic game between Canada and the United States "would be the dream for sure."

Like the Bear sisters, their mentor Lacquette had to leave home at a young age to pursue hockey professionally. Lacquette, who grew up in Mallard, Man., a community of 150 people, says it wasn't easy.

"Living in such a small community, it was hard to leave home," Lacquette says from her home in Calgary. "There were so many times when I was home sick, and a lot of Indigenous kids go through that."

Having to be far from home to be successful in sports or any other career puts many Indigenous kids at a disadvantage, she says.

"But to be able to overcome them and pursue your dreams, that is what inspires people."

Lacquette coached the Bear sisters three years ago on the APTN reality show "Hit the Ice."

"You can really see how driven they are and how passionate they are about playing sports, especially hockey," she says.

"I love that, because I can relate. And that's exactly how I was when I was younger.

"These two girls, what they accomplish is going to go a long way for First Nation and Indigenous kids throughout the country."

The twins have big ambitions outside hockey as well. Jordyn has her sights set on law school and Kyla wants to become an anesthesiologist.

But no matter where life takes them, they say will always make time to return home to mentor kids in hockey.

"We're hoping to give back and help younger generations succeed in life," Jordyn says. "And if they don't have support, we'll honestly just be a text or call away."

This report by The Canadian Press was first published March 26, 2021