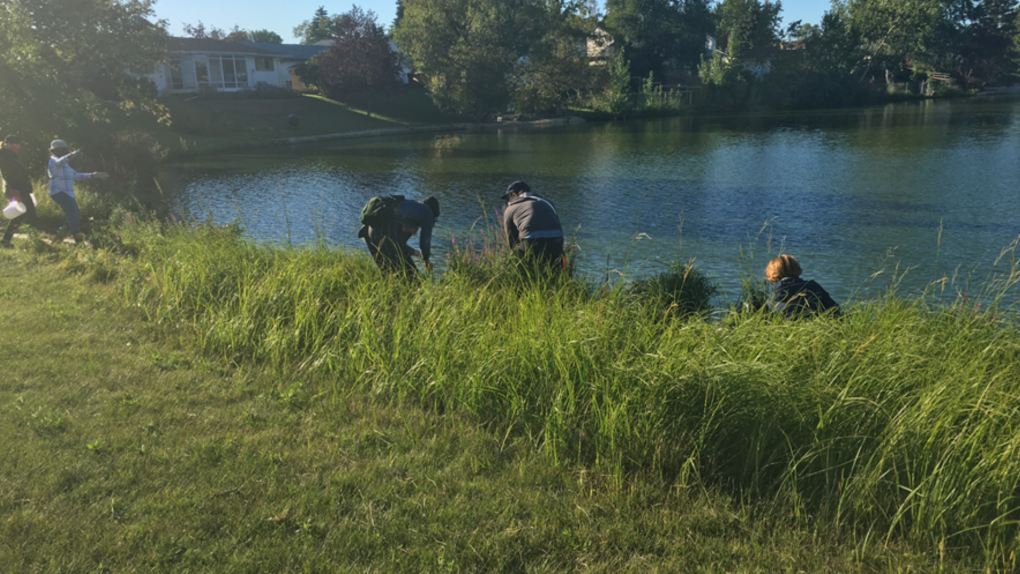 “You’ve got to get it now before it spreads,” said one of the pickers Kristopher Whittaker.

Purple loosestrife has popped up on the edges of the Lakewood retention pond in the Southdale neighbourhood. The weather conditions this year have allowed the invasive species to thrive.

“It’s been a perfect year for purple loosestrife development. Nice, dry, hot, exposed shoreline. So in Southdale that’s why we’re seeing probably prolific strands of it growing,” said Ducks Unlimited Senior Wetlands Specialist Lisette Ross. “It’s pretty but it’s not very useful. The birds don’t like it. The bugs don’t like it.”

Purple loosestrife arrived in Canada from Europe around 200 years ago and has caused problems for wetlands ever since.

“(Purple loosestrife) spreads and creates dense mats that end up smothering all the native wildlife,” said Sarah Jane Martin, one of the community members who came out Thursday night.

The species has no natural predator, so a species of leaf beetle known as Galerucella calmariensis is usually released to battle the invader.

But COVID-19 has complicated that, said Lisette Ross.

“This year because of COVID, probably for the first time in 25 years, we’ve kind of pulled back a bit on the program that we’ve shared just because of the concern of having summer students all together.”

While the program has been pulled back, Ross said grassroots solutions help.

“I really appreciate that people are out there because it’s not an easy plant to remove.”

People who do remove purple loosestrife can put it in their yard waste for the city to collect.