'This is for you': Blue Bombers bring home the cup

WINNIPEG – The Winnipeg Blue Bombers were met with thunderous cheers from hundreds of fans who greeted them at the airport as the new Grey Cup champions brought home the cherished trophy Monday afternoon.

The Blue Bombers showed off their new bling – by hoisting the Grey Cup high above their heads.

“What it meant to me? All of you guys – all of you – that’s what it means to me to every single person here who bleeds blue and gold,” said Bomber Adam Bighill. “For Winnipeg, for all of Manitoba – this is for you guys and we brought it home you.”

Despite a minor mishap with the CFL’s trophy – breaking in two – Winnipeg morning show host Ace Burpee pointed out “we break the drought, we break the cup.”

This moment has been decades in the making for hundreds of Bombers’ fans. It’s been 29 years since the Winnipeg Blue Bombers brought home the cup.

“It’s been a long wait, but it’s worth it isn’t it?” asked Bombers’ quarterback Zach Collaros. “I just want to thank you guys – for me personally it’s been a hell of a ride.” 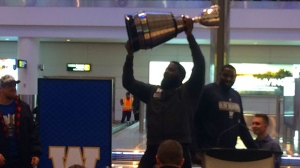 Grey Cup champs touch down to fanfare in Winnipeg