WINNIPEG -- It will be a party 29 years in the making.

A Grey Cup celebration will take place in Winnipeg Tuesday to mark the Blue Bombers 33-12 win over the Hamilton Tiger-Cats. It was a matchup dubbed the ‘Drought Bowl’ because both teams had gone decades without a championship win.

“There will be a parade, and it will be on Tuesday afternoon,” Wade Miller, president and CEO of the Winnipeg Blue Bombers, told CTV Morning Live Winnipeg’s Rahim Ladhani on Monday morning.

The parade will get underway at 12 p.m. on Portage Avenue at Hargrave Street, before making its way to The Forks.

The parade route goes east down Portage Avenue, then turns south onto Main Street before veering onto William Stephenson Way.

Once at The Forks, a celebration will get underway that’s expected to wind down at 3 p.m.

Attendees can expect a flyover from RCAF at around 1:30 p.m.

Players, coaches and staff will be there along with Winnipeg Football Club officials, Premier Brian Pallister, Mayor Brian Bowman.

Team mascots Buzz and Boomer will also be there with the team’s cheer and dance team, the Blue Bombers Drum Band and Dancing Gabe. 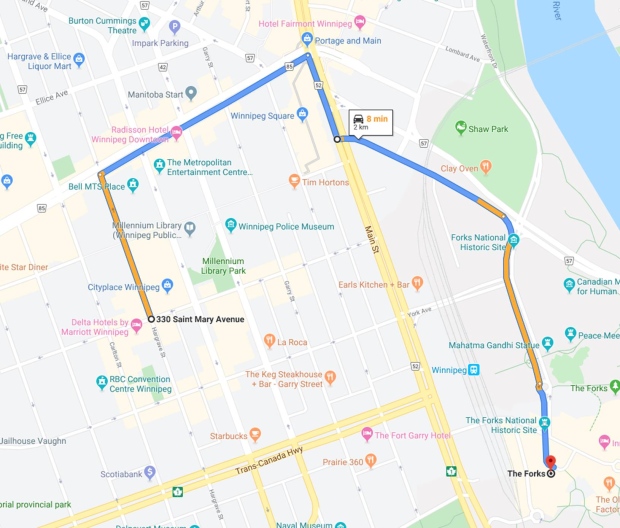 Organizers shared this Google map image of the parade route.

An official with the football club told CTV News they chose to hold the festivities Tuesday, so Bomber players from the U.S. could attend and still have time to travel home for American Thanksgiving on Thursday.

REFLECTING ON A WIN

The team arrived at Winnipeg’s airport at around 3 p.m. Monday to a massive crowd of supporters.

Speaking over the phone from Calgary, Miller, who first joined the team as player in 1995, called the win great for the team and the city.

“It felt really good all game,” said Miller of the team’s dominant performance.

He said even though the Bombers led the scoreboard throughout the game, he wasn’t counting on the win until the end.

“Not until the clock ticked zero on the fourth quarter, because it’s the CFL so you never know what can happen,” he said. “Never take anything for granted.”

He described the winning team as a “great locker room.”