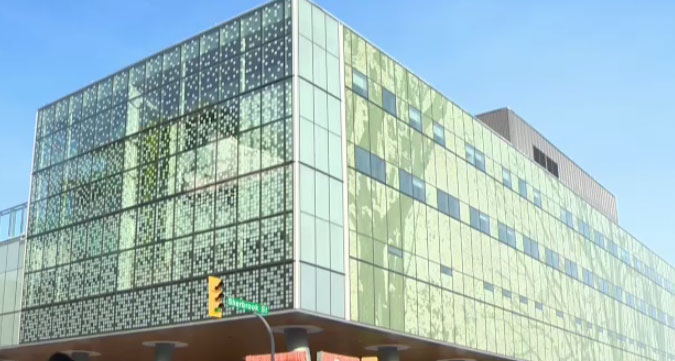 WINNIPEG -- The new women’s hospital in Winnipeg officially opened on Dec. 1, but it wasn’t the only addition to the city that day - two babies were born in the new facility.

According to Shared Health, 93 women and babies were transferred from the old hospital to the new one on its opening day.

“Over the course of just four hours, more than 180 staff and volunteers transitioned existing patients and welcomed new families as we marked First Patient Day at the new Women’s Hospital,” said chief nursing officer Monika Warren in a news release.

“Each patient was transferred individually by our skilled and professional employees in a well-organized sequence using our underground tunnels and new staff skywalk.”

During the course of the HSC Women’s Hospital first day it welcomed more than 21 new patients, including the two babies.

CTV News Winnipeg spoke with Raylene Carrothers, whose daughter Leah Rae Sutherland was the first baby born at the hospital. She described the experience as historic and said the new facility is an improvement over the old one.

“At first I thought it wasn’t a big deal, but just thinking of it now, it’s history,” said Carrothers. “It’s really cool.”

HSC tweeted that Macon Joseph Greenberg Feller was the last baby born at the old facility at 7:17 a.m. on Dec. 1 -- 13 minutes before the new hospital opened.

The new hospital, located at 665 William Ave., is 388,000 square feet and features a neonatal intensive care area, 17 labour and delivery rooms and an inpatient unit for gynecology.

The hospital was promised in 2007 and completed in 2014, but the opening was delayed because of construction issues.

The province said the hospital was built on budget at $233 million.