WINNIPEG -- The new women’s hospital opened its doors in Winnipeg more than a decade after it was promised.

The first patients were welcomed into the new 388,000 square foot facility on 665 William Avenue at 7:30 a.m. Sunday, with patients from the old hospital being moved into the new building throughout the morning.

In an email from Shared Health, a spokesperson said the last patient was moved from the old hospital at 735 Notre Dame Ave. shortly after 12:05 p.m. The old facility stopped accepting patients when the new women’s hospital opened.

“All patients are now safely settled in to the new building,” the spokesperson said.

The hospital was originally promised in 2007 and was completed in 2014, but due to construction problems the opening was delayed.

The province said while it may be late, the facility was built on budget at $233 million.

Shared Health said more information about important milestones will be shared in the coming days. 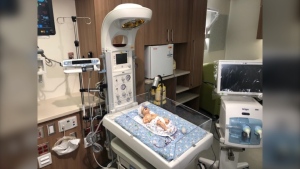 The new women's hospital in Winnipeg