'We ain't seen nothing yet': 'Climate Jam' brings Manitobans together to combat dire warnings of climate change

The consequences of climate change on future generations could be dire.

That's why a group of local organizations came together in Winnipeg Saturday to tackle problems and solutions at the first Peg City Climate Jam.

“We ain’t seen nothing yet,” said Curt Hull, a project manager with Climate Change Connection, a non-profit group working to educate Manitobans.

Hull said prairie models show there's been about 11 days in the summer above 30 degrees so far. In 60 years from now, an average year may have 40 of them.

"Tornadoes, hail storms, and torrential rainfall events, those kinds of extreme weather events are expected to be more frequent and severe,” he said.

Hull was one of about 160 scientists, academics and concerned citizens who attended the first Peg City Climate Jam.

Some of the workshops covered topics including building insulation, transportation, nature restoration and the carbon tax.

Organizers said more tools are needed to handle the crisis. 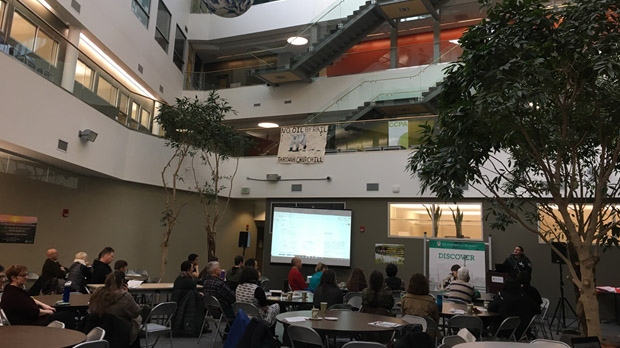 "We're also calling on governments to name this as an emergency… on the scale of the Second World War. We need that type of resource response to move us off fossil fuels. Otherwise we are going to experience these dire effects," said Molly McCracken who is also the director at the Manitoba office of the Centre for Policy Alternatives.

British meteorologists recently found 2018 to be the fourth warmest year on record, and predict the next five years will be even hotter.

READ MORE: 2018 was 4th warmest, but next 5 years could break records: U.K. scientists

Hull and McCracken believe its imperative Manitobans be prepared for what's to come, with one key issue being to figure out how to be self-sufficient.

"Like our food coming from half way around the world, like coming from California. We can grow it ourselves and feed ourselves. We're not sufficient on fossil fuels to heat our buildings. We need buildings that are most efficient, or better insulation,” said Hull.

Organizers are raising money to hold more climate jams in other parts of Manitoba later this year.