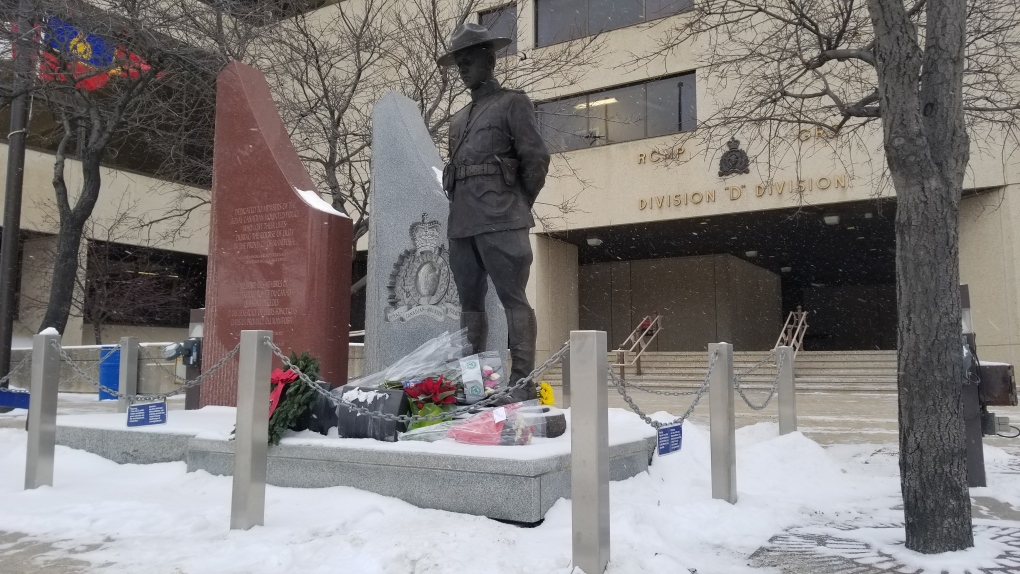 The city is mourning the death of an on-duty RCMP officer, Const. Allan Paopst, who died in a collision on Manitoba’s Perimeter Highway Friday afternoon. (Source: Dan Timmerman)

WINNIPEG -- The city is mourning the death of an on-duty RCMP officer who died in a collision on Manitoba’s Perimeter Highway Friday afternoon.

Flowers lined the base of an RCMP Statue at RCMP “D” Division Headquarters, as flags flew at half-mast in memory of Const. Allan Poapst.

READ MORE: RCMP officer killed in collision was a father of three who loved his job

A GoFundMe page for the late officer has been set up and was already over $10,000 as of Sunday afternoon. The fundraising goal is set to $20,000.

Condolences poured in on social media after RCMP confirmed the officer died while on-duty in a head on crash.

Winnipeg Police posted a video to Twitter where police cruisers line the road in front of an RCMP detachment, lights flashing as officers paid respect.

Extending our sincerest condolences to the officer’s family and our colleagues with the Royal Canadian Mounted Police. pic.twitter.com/qV9o4eZIhi

The Winnipeg police were not alone in their tribute to Poapst.

In the day following the news of the RCMP officer’s death, a flood of support and condolences to Poapst’s family, as well as his RCMP community.

"My deepest condolences to the family, friends and fellow RCMP members on the tragic passing of a Manitoba officer. On behalf of all Manitobans, thank you for your dedication and service," tweeted Premier Brian Pallister.

One man who played hockey with Poapst took to Twitter sharing memories of time spent both on and off the ice.

"He was part of my hockey family. He enjoyed playing the game and he was an honest player and a good person. His smile in the dressing room will be with me always," another person tweeted.

The cause of the crash is under investigation but RCMP said weather conditions at the time were atrocious.