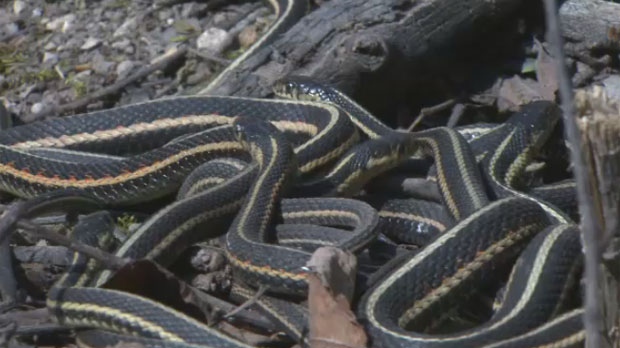 The ritual begins with the emergence of the males, who then bombard the females once they come out from underground. (File image)

With the temperatures in Manitoba starting to warm up, the red-sided garter snakes at the Narcisse Snakes Dens in the Interlake are starting to slither out of their winter dens and begin their mating ritual.

“Now that spring is here and it’s starting to warm up they’re slowly starting to come out and so what we’re seeing at Narcisse right now is lots and lots of snakes. They’re coming out of the dens and then they’re breeding,” said Pauline Bloom, regional wildlife manager for Manitoba Sustainable Development.

The ritual begins with the emergence of the males, who then bombard the females once they come out from underground. A number of male snakes will then surround a lone female snake, forming what’s known as mating balls.

After the mating is complete, the male puts a plug in the female so she can’t breed again. The female then leaves the den, while the male returns to try again.

“I don’t know how she picks which one she wants to breed with or if she has a choice, but one of them will be given the opportunity to mate with her,” Bloom described.

Bloom explained the reason there’s such a high concentration of snakes at Narcisse has to do with the limestone and bedrock being close to the surface, as well as the close proximity to wetlands and marsh habitat.

“It’s kind of the perfect combination of winter survival habitat, so the underground dens and then summer foraging habitat – wetlands,” she said.

Bloom notes Narcisse is something unique to Manitoba and she doesn’t think there’s anywhere else in the world where people can see such large congregations of snakes.

“It’s a very special place and we’re lucky to have it in Manitoba.”

Mother’s Day has typically been the best weekend for visitors to see the tens of thousands of snakes at Narcisse, but this year things were delayed due to the cold winter and spring, as well as a lack of rain. For anyone who is wanting to see the mating ritual, Bloom recommends visiting over the next two weekends.