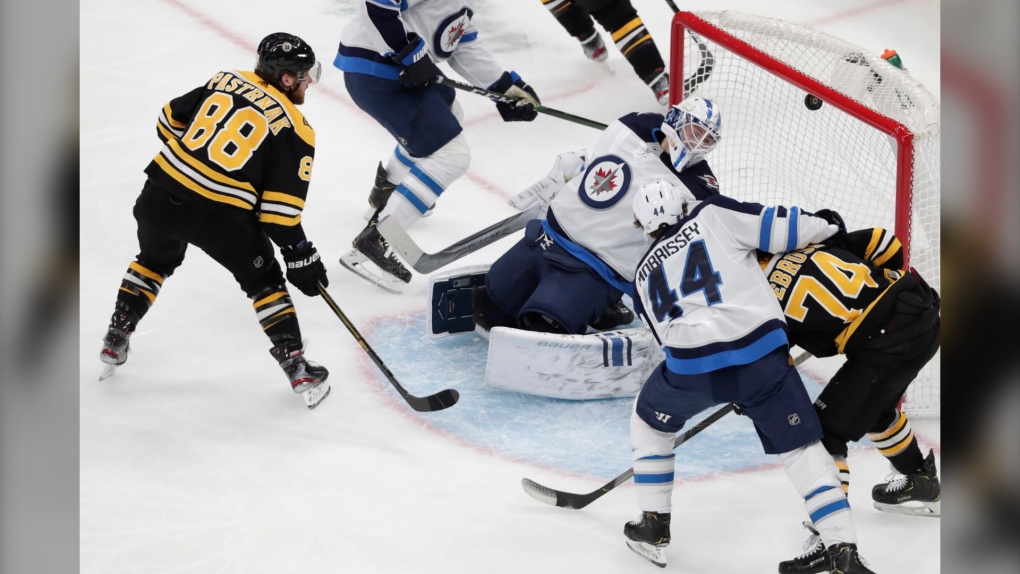 BOSTON -- The Bruins used a barrage of different scorers to snap a three-game losing streak at Nashville earlier this week. Goals from two of their youngest stars were sufficient to help them get past the Jets.

David Pastrnak had a hat trick to extend his point streak to 12 games and Jake DeBrusk added two goals, including the go-ahead score in the third period, and Boston held off Winnipeg 5-4 on Thursday night.

It was Pastrnak's third hat trick this season and eighth of his career. He has nine goals and 10 assists during his current point streak, and his 35 goals overall lead the NHL.

"The last few games, I feel like we had a little trouble scoring," Pastrnak said. "It's good to finally be able to put together two games."

It comes a perfect time for Boston, which plays its next three on the road, beginning Saturday against the New York Islanders.

"We've got to keep it moving heading out to the road trip," Pastrnak said.

Kyle Connor, Andrew Copp, Neal Pionk and Mark Scheifele had goals for the Jets. Nikolaj Ehlers added a pair of assists. The loss stops the Jets' win streak at two. They end their four-game road trip 2-2.

"We were about 10 minutes away from it being a great road trip," Copp said. "Kind of a sour taste right now. I feel like we let one get away."

"It was a good game all the way throughout," Brossoit said. "A lot of good things on both sides. They just outscored us."

Backup Jaroslav Halak also got the start for the Bruins. He stopped 17 shots.

Winnipeg took a 4-3 lead in the third when Schiefele bounced a shot off the pad of Halak and into the net. But Pastrnak completed his scoring just minutes later, tying it on a shot just in front of the net off assists by David Krejci and DeBrusk.

Just 30 seconds, later DeBrusk tipped in Charlie McAvoy's shot out of a face off to put Boston in front with 8:14 left.

The Bruins edged in front 3-2 with just over a minute to play in the second when DeBrusk forced a turnover near centre ice, sped ahead on a breakaway and pushed his shot into to the top of the net.

But after an interference penalty was called on Boston's Matt Grzelcyk, the Jets capitalized and tied it with 7.5 seconds left in the period on a long goal by Pionk from just inside the blue line.

Penalties also played a role in the early goals.

The Bruins were hit with a penalty for too many men with 15:37 left in the second. The Jets then took a 2-1 lead with 23 seconds left in their ensuing power play on Copp's tip-in of Josh Morrissey's hard shot from the high slot.

The Jets paid the price for a penalty less than four minutes later when Blake Wheeler was whistled for tripping David Krejci. Pastrnak scored his second goal of the night just 5 seconds later, assisted by Torey Krug and Marchand.

It was Boston's 40th power-play goal of the season.

The teams traded goals in the first period.

Connor got free on a 2-on-1 break up the left side, cut inside defender Krug and flicked a backhanded shot past Halak for his 22nd goal of the season to give the Jets a 1-0 lead.

The Bruins tied it with 2:46 left in the period after Joakim Nordstrom spun away from a scrum behind the net and fed Pastrnak at the top of the slot for his 33rd goal of the season.