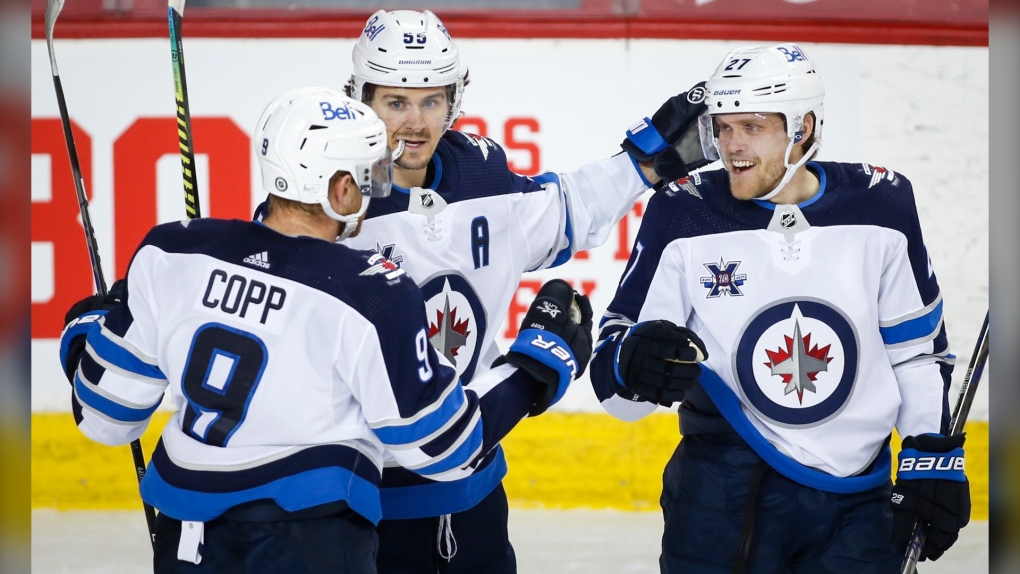 CALGARY -- A little line juggling produced big results for the Winnipeg Jets in a 5-1 win Monday over the host Calgary Flames.

Mark Scheifele, Kyle Connor and Nikolaj Ehlers were a productive combo for the Jets.

Scheifele scored twice and had an assist for Winnipeg (22-12-2). Ehlers had three assists and Connor two.

Scheifele, who is Winnipeg's leading scorer with 15 goals and 28 assists, replaced Pierre-Luc Dubois on that line. The latter scored with Scheifele's regular linemates Paul Stastny and Blake Wheeler.

"You've got two skilled fast guys like Nik and K.C., you've got to keep your speed going," Scheifele said. "Let them get going and get roaming around in the offensive zone.

Nate Thompson and Andrew Copp also scored for the visitors. Winnipeg starter Connor Hellebuyck made 29 saves for the win.

Winnipeg remained second in the North Division and a point behind the front-running Toronto Maple Leafs.

After Winnipeg fell 4-2 to the Flames on Saturday, Jets head coach Paul Maurice decided a change up front was in order.

He also threw Scheifele, Ehlers and Connor together for research purposes.

"Those three guys will work really well together in certain matchups I think," Maurice said. "What we need to do in the last 20 games is get two or three options depending on the kind of teams we're playing."

"It feels like we've been on the road all month," Scheifele said. "Those two games at home didn't even feel like we were at home because it was so quick."

Winnipeg leads the nine-game season series against Calgary 5-2-1. After three meetings in four days, the two clubs don't face each other again until May 5.

Jacob Markstrom stopped 19-of-23 shots over two periods. David Rittich turned away five of six in the third.

The Flames didn't overcome calls that didn't go their way.

Thompson's first-period goal was reviewed for a kicking motion, but was allowed to stand. A Calgary goal in the second was waived off for goaltender interference.

"We don't do a very good job of dealing with adversity," Flames winger Matthew Tkachuk said.

The Flames were tied with the Vancouver Canucks and trailed the fourth-place Montreal Canadiens, who held down the final playoff berth, by two points.

"Time is ticking. We've been saying this for the past however long, but time is really ticking. If we have any hope or chance of stringing a bunch together against all these teams ahead of us, we have to dig down deep. I certainly have to be a hell of a lot better than I was tonight."

Dubois scored on a rising wrist shot from the top of the circle at 1:04 of the third period. It was the second shot Rittich faced in the game.

Copp made it 4-1 for the visitors at 14:31 of the second. The centre redirected Ehlers' cross-ice setup by Markstrom's right toe.

Officials disallowed a Flames goal at 5:32 ruling that Milan Lucic interfered with Hellebuyck on the play.

Scheifele scored his second of the game at 3:31. Ehlers skated the puck deep and dished to Scheifele, who shelved his own rebound.

Winnipeg led 2-1 on two goals scored in less than two minutes late in the first period. Schiefele's one-timer off the rush beat Markstrom stick side at 18:13.

Thompson's goal at 16:19 was reviewed to determine if he'd kicked Dylan DeMelo's shot on goal into Calgary's net. The goal stood to draw the Jets even.

A tic-tac-toe passing play below the hashmarks with Johnny Gaudreau and Tkachuk opened the net for Lindholm's power-play goal at 2:24.

This report by The Canadian Press was first published March 29, 2021.