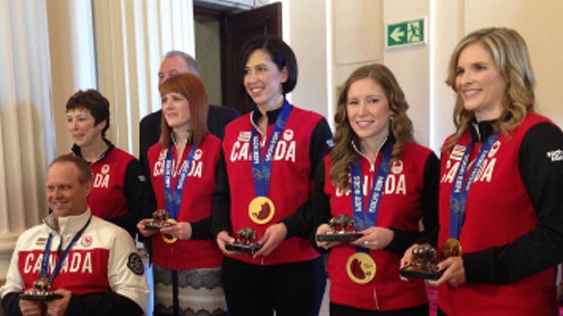 Janet Arnott is pictured here with paralympic champion Dennis Thiessen and Team Jennifer Jones as they were inducted into the Order of the Buffalo Hunt on March 27, 2014 in Winnipeg.

WINNIPEG -- A new award category in the Sport Manitoba Coaching Awards is being named after late Manitoba curling athlete and coach, Janet Arnott.

Arnott had a long career in curling, winning the Scotties Tournament of Hearts three times and World Curling Championship once.

Later in her career, she coached Jennifer Jones’ team to gold at the 2014 Winter Olympics.

"These awards are about recognizing Manitoba's coaches who have made a significant, unique impact in the lives of their athletes," said Sport Manitoba President & CEO Jeff Hnatiuk.

"Janet's decades of contributions as an outstanding curler and coach exude leadership and positive influence, and this new award will carry her name forward in a very memorable way."

The Janet Arnott Award in the Train to Train Athlete category is awarded to coaches who are responsible for athletes who compete at the Canada Games and National Championships.

"We are so excited to be able to name our new award after such an incredible woman," said Sport Manitoba Coaching Manager Susan Lamboo.

"She has inspired many athletes and coaches across Manitoba to pursue their passion in sport."