WINNIPEG -- Thousands of Winnipeggers gathered on the grounds of the Manitoba Legislative Building Friday to take part in a global strike for climate action.

Students, young children, families, and activists held signs and spoke out about taking action on climate change to help our planet.

“This is a crisis, it’s serious, and we want politicians and world leaders to respond similarly – this is really serious,” said event organizer Meghan Mast.

The strike was organized by Manitoba Youth for Climate Action as part of a global movement inspired by 16-year-old Swedish activist Greta Thumberg.

A week of global climate activities got underway on Sept. 20, with other cities across Canada like Montreal, Ottawa, Toronto and Calgary, all taking part in Friday’s strike.

The strike started at noon in Winnipeg and was followed by a march.

Organizers estimate there were about 10,000 people who took part. Youth recognize the need for change

The crowd at the legislative building was filled with students and young kids.

One of them, 11-year-old Maddie Heather said she wants to make a difference.

“As it says on our sign ‘get off your lazy butts and participate,’ like change the world,” she said.

“I am terrified. I want to be a doctor, I want to change the world and help people live, but I can’t do that because no one else is helping people live right now.”

Heather said she recognizes the importance of participating in these strikes and taking action on climate change.

“I am absolutely proud to be here, but I wish I didn’t have to be here,” said Menezes.

Art City Winnipeg is a not-for-profit community art studio that works with students around the city through various after school programs.

It collaborated with Manitoba Youth for Climate Action to create an earth sculpture, that lead the way during Saturday’s march.

“We recognize that the climate is a really important issue to the kids that come to our programs, so the idea to collaborate with this event came from that,” said Toby Gillies from Art City.

He said the project was aimed to remind people to “love where you live.”

One of largest crowds ever in Winnipeg: Police

Winnipeg police said the crowd for Saturday’s strike was one of the largest ever in the city.

“One of the biggest crowds I think I’ve ever seen in Winnipeg outside of maybe a Whiteout party,” said Const. Rob Carver with the Winnipeg Police Service.

Carver said the crowd was self-regulating and there were no issues with police.

“This is an absolutely phenomenal crowd, really there isn’t much in the way of need for police presence,” said Carver. 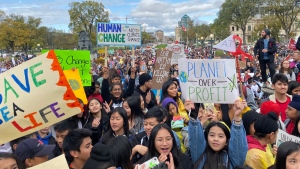