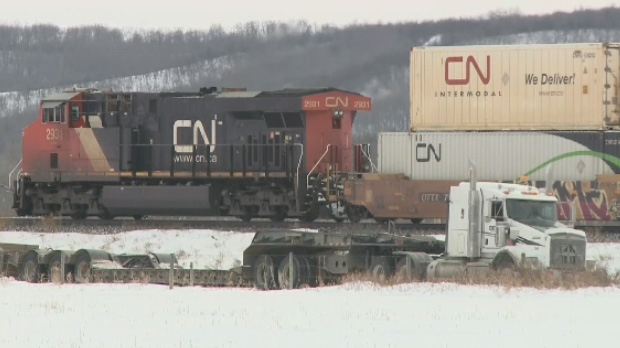 CN says the leak has been contained.

UPDATE: Trains were back up and running as of noon on Sunday, following a derailment near St. Lazare, Man. the day before, according to a CN news release.

“CN apologizes for any inconvenience this incident has caused to the community and would like to thank the first responders who attended the derailment site,” said the release.

CN’s environmental crews continue to clean up the site.

The cause of the leak is under investigation.

There are no reports of injuries or fires.

CN says the leak has been contained and did not penetrate the Assiniboine River.

Crews came onto the site to assess how much oil had spilled.

The reeve governing the area spoke to the spill from a pro-pipeline rally in Moosomin, Sask.

“It’s just freaky that it would happen while this is on today,” said Lowes.

Coincidences aside, Lowes believes incidents like this are inevitable.

“Personally, I think pipelines are much more safe. When you have trains, when you have tracks, you’re going to have derailments. It’s only a matter of time.”

The reeve said he plans to visit the area later in the day.

Once that’s finished, he says investigators will conduct interviews and document the scene to understand how the derailment occurred.

Fournier expects teams to arrive on site by Saturday the evening.

St. Lazare is located approximately 330 kilometres west of Winnipeg near the Saskatchewan border.