Winter sports equipment sales ‘off the hook’ in Manitoba 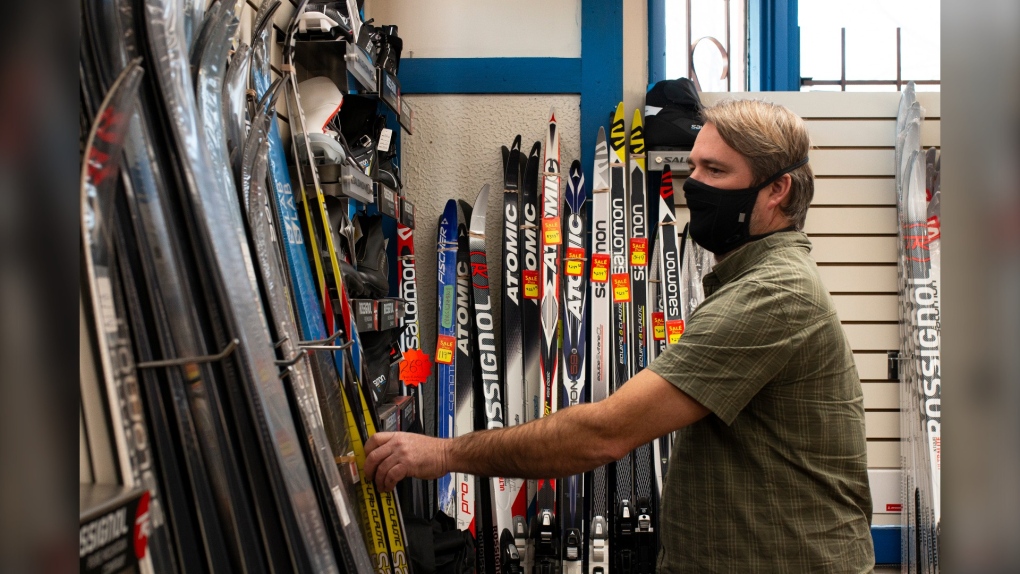 Dean Sampson, owner of Sampson's Sporting Life, displays Nordic skis that are cordoned off inside his Pembina Highway store. He says cross-country-ski sales have been "booming off the hook."

WINNIPEG -- Many Winnipeggers are flocking to order their winter outdoor sports equipment, keeping local businesses hustling even in the face of Code Red restrictions.

Demand for cross-country skis and snowmobiles experienced an earlier than usual start this year at the end of summer. It also sustained a spike in interest, much like bike and home-gym-equipment sales soared in the spring and summer.

Nordic-ski sales have been “booming off the hook,” with sales reaching around eight times the amount of this time last year, said Dean Sampson, owner of Sampson’s Sporting Life. “We’ve never seen anything like it.”

Both stores said they’ve been busy answering phone calls and filling curbside pickup orders, which applies to most sporting goods besides some winter clothing in their stores.

“A lot of people aren’t going on those big vacations as they normally would over the holiday season,” said Wuzinski. “A lot of people I guess either rationalized they weren’t going to do a vacation, or they kind of figured they’d be cooped up at home, so they just bought stuff early.”

In the early days of the pandemic in April, Sampson said he took a calculated gamble and ordered five times the amount of winter sports equipment he usually does, a decision he says is now paying off.

“From customer after customer phoning around, it sounds like we’re the last store in the city that has much of a collection,” said Sampson.

Stocks for certain sizes of cross-country skis may get low by the end of December, he said.

Sampson said normally he’s able to reorder certain products throughout the month, but the global supply chain is stretched thin. He said he thinks the orders retailers are receiving now will make up their inventory for the rest of the season.

Wuzinski, however, said although demand is high, Alter Ego Sports are covered.

“There is stuff coming,” he said.

As for alpine ski and snowboard sales, Sampson said his store hasn’t seen the kind of jump other provinces have seen because of current Code Red restrictions in Manitoba.

“Right now, Manitobans are waiting to see kind of what’s going on with the lockdown,” he said.

Ski hills have been closed since November 12 and could potentially reopen next week, provided the Code Red restrictions aren’t extended. Premier Brian Pallister, however, has suggested an extension of the restrictions could be a likely possibility.

Winnipeg resident Colten Platschik, 21, tried snowmobiling last year for the first time, which convinced him he should look into buying one for this winter since he wouldn’t be able to travel due to the COVID-19 pandemic.

“I’m staying home, so I’m saving money,” said Platschik. “I figured that I could spend it on a snowmobile to have a little bit of joy for the winter.”

He said he’s in the process of purchasing one from his friend, which has allowed him to avoid the stores where he’s heard sales have “skyrocketed.”

“It made me have a reason to actually want to enjoy winter since I’m not a big snow-type guy,” said Platschik.

After seeing how campers were running low this summer, Steven Karlenzig figured it’d also be a similar situation with snowmobiles—a hobby he’d grown up doing.

Karlenzig, who lives outside the city in Springstein, said he and his family opted to buy a snowmobile as another outlet to spend more time outside this winter and purchased one in late summer off of Kijiji.

“I was going to go look at a couple others before I bought this one, and they just got snapped up,” he said.

“That kind of reinforced my rationale for, ‘Okay, I got to be ready to buy one and have cash on hand."

He said one of his relatives also found himself in a similar situation but missed his chance on a good deal by waiting a few too many hours before contacting the seller.

Since Karlenzig bought his sled, he said the listing prices on Kijiji have gone up substantially.

Interested buyers may have a tough time tracking one down, but in-store and online stocks haven’t completely sold out.