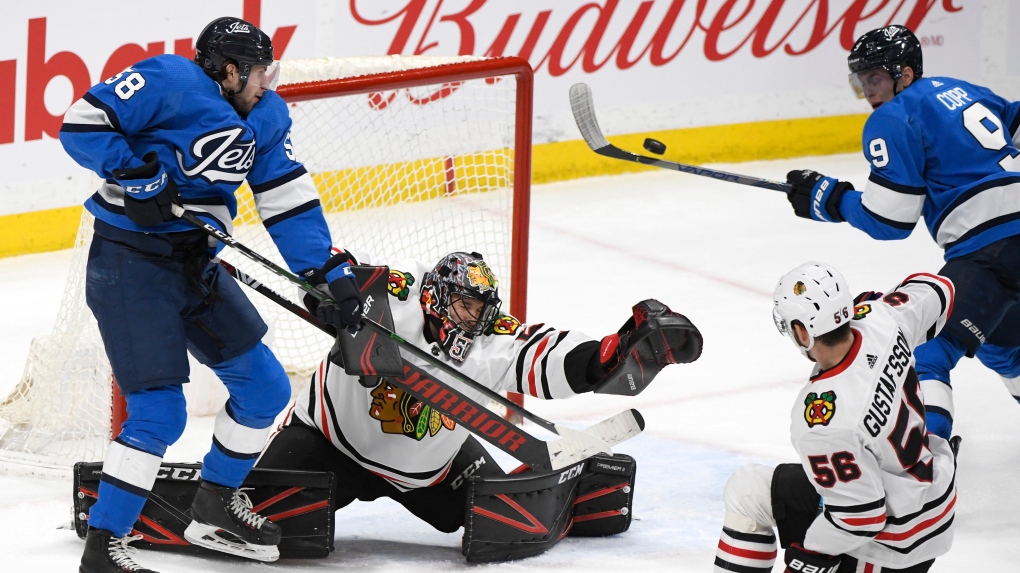 WINNIPEG -- Andrew Copp scored the go-ahead goal as part of a four-goal third period, and the Winnipeg Jets came from behind to beat the Chicago Blackhawks 5-2 on Sunday.

Copp gave Winnipeg a 3-2 lead when he beat Chicago netminder Corey Crawford up high from in close with 6:33 left in regulation after taking a perfect pass from forward Jack Roslovic.

Kyle Connor had a pair of goals while Blake Wheeler and Patrick Laine also scored for the Jets (29-23-5), who trailed 2-0 after 20 minutes.

Dominik Kubalik and Brandon Saad scored for the Blackhawks (25-21-8).

Connor, with his team-leading 28th goal of the year, and Laine added empty-net goals late in the game to secure the two points.

Connor Hellebuyck made 24 saves for the Jets, who won their third straight game, while Crawford stopped 33 shots for Chicago.

Just 16 seconds after Chicago captain Jonathan Toews went off for hooking in the third, Wheeler took a pass from defenceman Neil Pionk and snapped the puck past Crawford to tie the score 2-2.

The Jets had pulled to within 2-1, scoring while shorthanded.

With defenceman Sami Niku off for tripping, Copp pounced on a loose puck inside his own blue line, skated the length of the ice, then backhanded a saucer pass to Connor, who shot the puck on the bounce past Crawford.

Crawford made several sparkling saves in the period, stopping Mark Scheifele in tight and Copp in alone on another short-handed effort.

Kubalik scored just 15 seconds into the game when he converted a pass from behind the net from centre Drake Caggiula.

The visitors were all over the Jets for most of the period, finally upping the score to 2-0 when Saad finished a perfect pass from Patrick Kane on Hellebuyck's doorstep. Hellebuyck, who stopped Toews on a breakaway, had no chance on either goal.

Crawford made a sharp save off Winnipeg's Nikolaj Ehlers as the Jets started to put some pressure on Chicago late in the first.

It was the second of a six-game homestand for Winnipeg. The Jets are now 14-12-3 at home this season.

NOTES: Blackhawks captain Jonathan Toews recorded his 800th NHL career point. The Jets will induct Thomas Steen and Randy Carlyle into their Hall of Fame when they host the New York Rangers on Tuesday.

This report by The Canadian Press was first published Feb. 9, 2020.