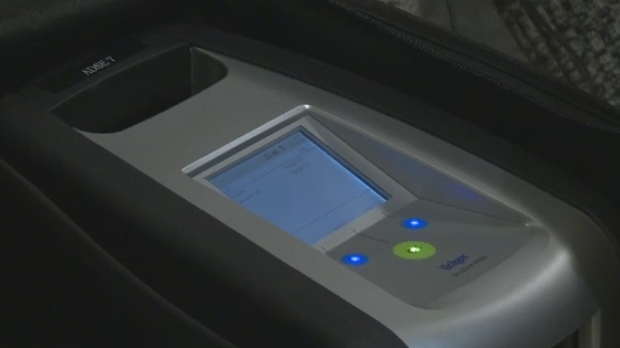 Police said the Dräger DrugTest 5000, which costs in the area of $5,000 per device and requires one-time use test kits that each cost $28, is used to detect recent use.

The first holiday season since recreational pot was legalized is in full swing, and Winnipeg police said officers will have a new tool in their check stop belt.

“I think it’s safe to say I’m excited to have this additional tool to use, and hopefully it doesn’t need to be used as often as it might be,” said Const. Stephane Fontaine, impaired driving and counter measures coordinator for the Winnipeg Police Service.

Fontaine said police now have seven Dräger DrugTest 5000 devices, approved for use by Canadian police, to test saliva for recent cannabis or cocaine use. The new tools will be rolled out Dec. 1 for the first day of the service’s annual holiday check stop program.

“You’re going to use this device when you suspect that there’s a drug, in this case specific to cannabis or cocaine,” he said. “So if you suspect there’s been recent consumption of those two drugs, but you’re unable to form the grounds that you need to arrest for impaired driving, this is a tool to help you either eliminate going to an arrest or ultimately supporting your suspicion.”

Fontaine said the device will be used at check stops in instances where an officer suspects cannabis or cocaine use, but it won’t be necessary in every arrest.

He said, as with past practice, if a driver shows “gross signs of impairment” it would result in an automatic impaired driving arrest.

Device designed to detect recent use

Police said the Dräger DrugTest 5000, which costs in the area of $5,000 per device and requires one-time use test kits that each cost $28, is used to detect recent use.

Officers demonstrated the test using a reporter at the police service’s press conference, who said he had last consumed cannabis 14 hours before. He measured negative for THC.

However, Fontaine emphasized there’s no safe formula cannabis users can use to determine how long to wait before driving.

“It’s very difficult to provide you with a magical number in which you can expect to be sober,” he said, explaining factors like potency, method of ingestion and personal tolerance levels can affect a person’s level of impairment. “It’s not a safe thing for me to provide you with some magical number because of all the variables that come into play when you’re dealing with cannabis.

“Everyone wants to compare it to alcohol and how structured we know alcohol enters into the body and then eventually gets metabolized. We can’t do that same correlation with cannabis,” he said.

“Unfortunately, it depends on each person, but be aware -- as soon as you consume cannabis you are under the influence of that drug and you may very well be a danger to everyone on the streets.”

Police said while testing saliva can help officers screen for impairment, for charges to go forward, other tests need to be performed.

“This leads you to either a blood demand, or a drug-recognition evaluation,” he said of the next steps.

Fontaine said drug impaired driving legislation that came into effect in June 2018 give police the power to either demand a blood sample if a driver is suspected of being under the influence of a regulated drug, or perform a drug-recognition evaluation, or both, and those steps are required with drug impaired driving charges.