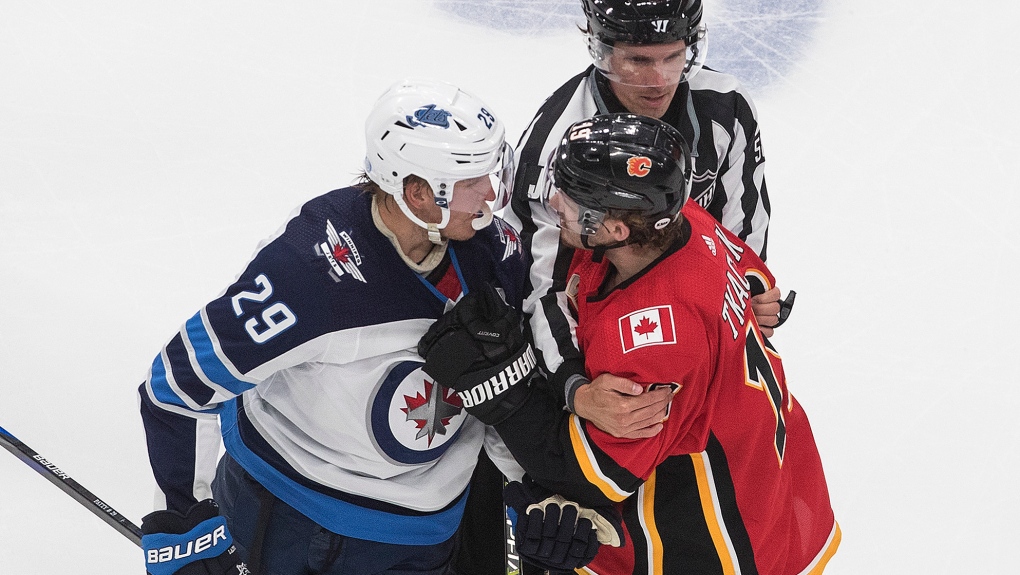 "It was a dirty, filthy kick to the back of the leg. You can't see it on the program feed (TV camera angle), but if you take the blue line feed and zoom in, he went after the back of his leg and could have cut his Achilles."

Scheifele, who scored a record-setting 14 goals in 17 playoff games just two seasons ago, went into the sideboards awkwardly upon contact, and immediately grabbed his left leg in a panic. Both Calgary and Winnipeg's trainer came to his aid before he was helped off the ice, unable to put weight on the injured leg.

While the NHL has not provided an update on his injury, Maurice's tone with reporters after the game did not provide optimism for a quick recovery or return.

"He could have ended the man's career," Maurice said of Tkachuk's hit

Tkachuk, a skilled forward who's built a reputation for being a pest by toeing the line of what's clean and what's dirty on a few occasions in his career, denied any wrongdoing calling the incident "unfortunate and unlucky."

"It was such an accident, and I feel terrible about it, but there was nothing that could have happened," Tkachuk said.

"[Scheifele] just dumped it in and was going the other way. I was committed to my check and, like I said, was kind of going down a little bit and had a little bit of the speed wobbles with my skate," he said. "At no point did I feel my skate touch him."

Shortly after the hit, the Flames forward answered to Jets captain, Blake Wheeler, a fight lasting only a few seconds before both players fell to the ice and headed to the penalty box.

It seemed to have given the Jets a boost, initially.

Andrew Copp opened the scoring shortly after, taking a no-look feed from Adam Lowry behind the net and one-timing it past Flames goalie, Cam Talbot, from the slot.

But Calgary's special teams dominated Winnipeg in the second period, with power play goals from Johnny Gaudreau and Mikael Backlund, and a short handed goal from Tobias Rieder that proved to be the game winner.

The Jets had seven tries on the man advantage but did not score on any. While the top power play unit was without one of its top scorers all game, it lost another scoring threat when Patrick Laine went to the dressing with what appeared to be a wrist injury. He took a Mark Giordano slash to the hand moments before, though Maurice said the injury is unrelated to the incident. Nonetheless, it kept him from returning to the game.

"The last couple [of power play opportunities] we didn't have [Scheifele] or [Laine]," Wheeler said.

That's 80-100 goals in a season that you're losing from your line up, and that's directly why you have a good power play when you have guys who can shoot the puck like that."

Before leaving with the injury, Laine was moved to the top line with Kyle Connor and Blake Wheeler to replace Scheifele. Wheeler was moved to centre to accommodate the shuffle.

"I think I managed [the bench] poorly at best," Maurice said about having to shuffle lines after Scheifele left the game. "You lose your number one centre, that's going to hurt, there is no doubt about it, but I couldn't find a rhythm with a group, and I don't think I did enough to give my players a chance."

Adversity in the form of injury is nothing new for the Jets, as the team battled the injury bug all season. But losing two players from its top two lines in a best of five series will be a hefty challenge to overcome.

When asked if there were any positives to take from the loss, Maurice said it's that Winnipeg did not get beat playing their "a-game" and that the team has a chance to come out much better next game.

Connor Hellebuyck saved 30 of the 33 shots he faced in game one. The fourth goal was an empty netter from Andrew Mangiapane.

The Jets will work through new line combinations at practice on Sunday, before playing games two and three, back-to-back, on Monday and Tuesday. Maurice says both Scheifele and Laine will see specialists for their injuries on Sunday.

The Monday matinee gets underway at 1:45 pm.