One-way streets for bikes in Wolseley scrapped by city 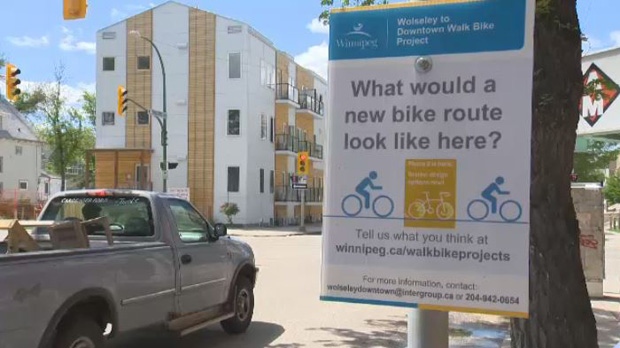 WINNIPEG -- The City of Winnipeg has scrapped the idea to put one-way streets in the Wolseley area in order to accommodate bike lanes.

The project intends to provide connections to the Omand’s Creek pathway, the protected bike lanes on Assiniboine Avenue and Sherbrook Street, the bike lane on Maryland Street, and the planned neighbourhood greenway on Ruby Street.

The city conducted three phases of public engagement to gauge residents’ thoughts and concerns on the proposed designs, which opted to cut sections of some streets, such as Young Street, Westminster, and Balmoral Avenues, down to a single lane of traffic and convert it to a bike path.

According to a city report, this sparked concern from Winnipeggers, who felt the change did not balance the safety and needs of all road users. Residents were also worried that a one-way section would limit access to Balmoral Hall and force cars to idle on Balmoral Street during pick-up and drop-off.

Some other feedback the city received included: Support for keeping the No. 10 bus; restricting right-hand turns from Portage Avenue into the Wolseley area; adjusting the speed limit to 30 km/h in the neighbourhood; and concern that removing parking could hurt businesses.

In the city’s report, it said following public feedback, it has made the following changes to its design for Wolseley to Downtown Walk Bike Project: