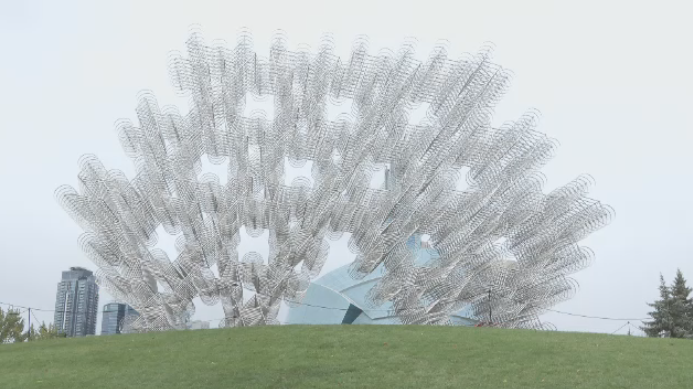 The art installation Forever Bicycles at The Forks will soon be leaving as its three year loan is coming to an end. Oct. 14, 2022. (Source: Gary Robson/CTV News)

An art installation that has been set up in Winnipeg at The Forks for the last three years will soon be gone and returned to the original lender.

The Forever Bicycles, which was created by Chinese artist Ai Weiwei, consists of 1,254 bicycles and has been set up at The Forks since September 2019.

"This has been an incredibly well-received piece that we've been fortunate to have on-site in Winnipeg by one of the world's most incredible artists," said Jenna Khan, the communications specialist at The Forks.

"I think having its stay coincide with the pandemic definitely made The Forks a destination, people were trying to get outside, people wanted to take in art, they wanted to experience things…walking the site at The Forks and enjoying public art pieces, like Forever Bicycles, was something we were able to do."

She added Winnipeggers were lucky to have the piece in the city for three years as it was only meant to be on loan for two but was extended an extra year.

Khan said if people are still wanting to see the piece before it is gone, this weekend is the time to do it.

"It's really something to see. So if you haven't made it down here to visit Forever Bicycles, it's definitely worth the time."

Khan said the plan is to have fencing set up next week around the piece and then specialists will fly into Winnipeg to take it apart.

Khan expects the entire piece to be disassembled by the second week of November.

As for future plans in the area, she said nothing is expected yet.

"We're always having conversations about bringing art to The Forks either as permanent works or as temporary installations like this one was. There are no immediate plans to replace it in its spot in the CN Field. But those conversations are definitely ongoing."