According to a news release from the team, Streveler is pursuing NFL opportunities.

The QB shared gratitude for his time in Winnipeg to social media.

So thankful for these past 2 years. Winnipeg will always be a special place to me. I love all my teammates and appreciate all your support. We’ll still always be Grey Cup champs! https://t.co/LYnbpemECZ

The quarterback signed with the team in 2018. According to TSN, last year he rushed 726 yards with 12 touchdowns in 17 games. During the Bombers 2019 Grey Cup win, he rushed 39 yards and a touchdown. He further endeared himself to Winnipeggers during the parade held for the Grey Cup victory, when he celebrated shirtless in a fur coat with a cowboy hat. 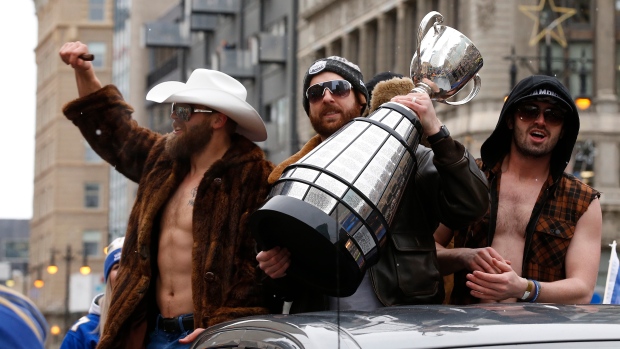 Chris Streveler, at left, at the 2019 Grey Cup Parade in Winnipeg. (The Canadian Press/John Woods.)

Streveler, 25, is from Illinois.