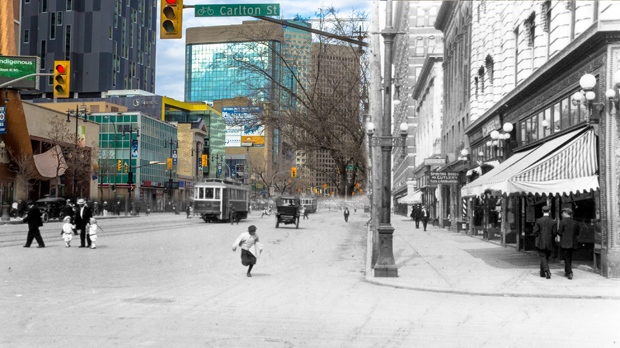 Supplied photo showing Portage Ave and Carlton Street on the day at the outbreak of World War I in 1914 blended with a recent photo. Photos on the app fade from past to present. (On This Spot & Virtual Heritage Winnipeg 02-091)

An app that allows users to visit a place and see it exactly as it looked in the past will launch in Winnipeg this weekend.

Makers of the ‘On This Spot’ app partnered with Heritage Winnipeg to build tours of historical snapshots taken in the Exchange District, pairing each photo with a current picture showing what’s changed.

The app lets people “see their own surroundings through the eyes of people from a century or more ago,” explained On This Spot’s cofounder and CEO, Andrew Farris.

“We’ve found a selection of, in Winnipeg’s case, 100 historic photos, mapped them out, where the photographer was standing when they took them. And then re-shot them from the same angle,” said Farris.

“And so viewer can kind of compare, then and now, and we aim to have them, y’know, very highly precise comparison.”

Farris said he got the idea after blogging about his travels using then and now photos, and the app currently includes digital tours of five Canadian cities, soon to be nine.

He also said users can build a memento of their tours into the past while using the app to explore an area by foot.

“They can effectively take their own then and now photo and superimpose themselves into historic photos that they like. And then they can share those on social media,” he said.

“It’s a fun, easy way to learn about your city, whether you’re from Winnipeg or a visitor,” said Tugwell, adding that she thinks the app could appeal to people of all ages.

“So, young and old, because I see everybody with their phones, it just makes more sense to be able to utilize their phones while they’re in the district, and learn.”

Tugwell said the Exchange District was the natural choice for where to start out because of it’s high concentration of historic buildings, but eventually they’d like to expand to other areas of the city.

The Winnipeg photos will be launched on the app Saturday to coincide with Doors Open Winnipeg in two tours, The Boomtown Era, 1870-1912, and The Time of Turmoil, 1913-1945. There is also a preview available online.