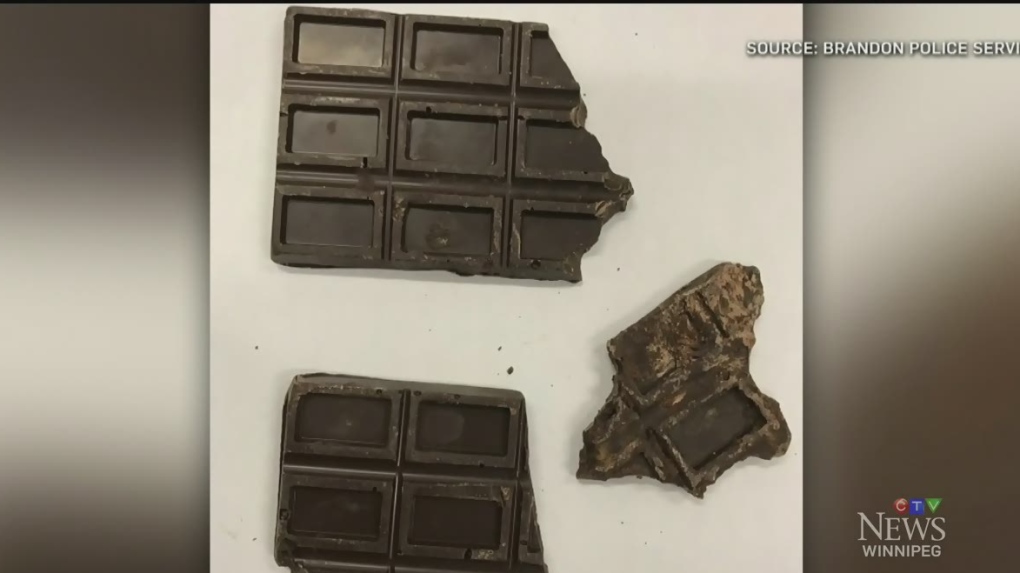 The dangers of cannabis edibles became all too real for a Brandon, Man. mother this weekend.

"I thought maybe it would be like how it works through an adult body, you just wait it out and they’ll be hungry and want water, but I was wrong,” she said in an interview Monday from Children’s Hospital in Winnipeg.

The 26-year-old doesn't know exactly how much they had, but believes they ate several squares of the chocolate.

She said each bar contains 750 milligrams of THC and about half a square relaxes her.

The mother said her kids appeared to be fine and it wasn't until hours later that the two-year-old girl started screaming. That’s when the family called 911.

Brandon police told CTV News Monday the bar was stored in the top shelf of the family’s kitchen and somehow the children got their hands on it.

The mother said her daughter ended up having several seizures after eating the chocolate and was given medication to sedate her.

Brandon police said no charges are being pursued and Child and Family Services also plan to follow up with the family.

The mother said her kids are recovering. Her two-year-old daughter was taken off a breathing tube Monday and a CT scan showed no brain damage.

She said her five-year-old son vomited twice after eating the chocolate and has been released from hospital.

"Keep it out of reach, hide it well, always have it in a lock box, because I would never want to know of another parent going through the same thing I did,” she said.

CANNABIS CAN HAVE SERIOUS CONSEQUENCES

Dr. Ginette Poulin is the medical director at the Addictions Foundation of Manitoba.

She said each person metabolizes cannabis differently and having too much can cause serious health problems.

Poulin also said children would have increased effects, because they have smaller bodies than adults.

"Things like arrhythmia, sudden death, certainly heart attacks, people who have presented in a coma, respiratory depression so they stop breathing, seizures," she said.

Poulin said for safety, she'd avoid having edibles in a home with children, but if people do have them they should make sure they are locked, like medication.

EDUCATION CAMPAIGNS TO COINCIDE WITH LEGALIZATION

The Liquor Gaming and Cannabis Authority of Manitoba said Monday edibles are expected to become legal at the federal level by October, although no date has been set.

It intends to develop education campaigns to teach Manitobans about lower risk edibles to coincide with their legalization.

Information like safe storage and labeling are some of the big concerns, the authority said.

UPDATE: On Tuesday the mother told CTV News her two-year-old was being discharged from hospital in Winnipeg, and they planned to head back to Brandon by evening.

“She is doing well. Back to her old self making jokes and being bossy,” she said in a message.