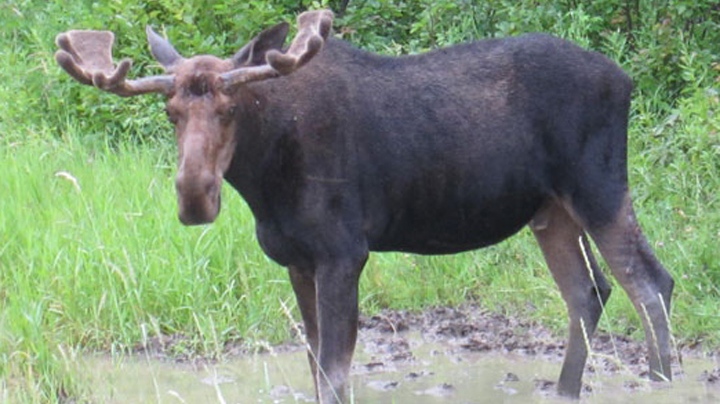 A moose is seen in this undated file photo.

WINNIPEG -- The Manitoba government and the Manitoba Metis Federation appear headed to a showdown over moose hunting that the federation says could end up in the country's highest court.

The government announced Friday that it is cancelling a short-term, limited moose-hunt season that was planned for this fall in the Duck Mountain and Porcupine Mountain areas.

The area has been under a moratorium since 2011. And the government said moose numbers have not rebounded, so the moratorium will continue for another year.

"Despite conservation closures, the moose population has not recovered to historic levels in those areas due to illegal hunting pressure and natural causes," Agriculture and Resource Development Minister Blaine Pedersen said.

The Metis federation said Friday it is going ahead with a planned hunt later this month. Elders in the region have reported healthier moose numbers, and a limited hunt of 60 bull moose, split between First Nations and Metis hunters, is sustainable, the group said.

"Indigenous people have rights, and the right for us to feed our families, for sustenance, is very clear in the law," federation president David Chartrand said.

The government is trying to subject Indigenous hunters to the same rules and limits as non-Indigenous ones, Chartrand said. He also said the government has failed in its duty to consult with Indigenous groups on the issue.

Chartrand told CTV News Friday the only consultation the MMF received from the province was a five-page email.

“I think right now Brian Pallister doesn’t understand consultation or accommodation because none of them have occurred as it relates to hunting in southern Manitoba,” said Daniels. “Hunting and fishing has been the economy of our communities for millennia.”

The hunting rules are tougher in southern Manitoba than in the province’s north. Daniels said the measures could further alienate vulnerable communities.

“Our people who are already on the margins of society are being intimated and pushed around by the conservation officers out on the land,” Daniels told CTV News Friday.

Pedersen said he has talked with Indigenous groups and has the right to protect animal populations when they become low.

"Manitoba has the duty and the obligation to protect the wildlife populations, including moose," Pedersen said.

The dispute came the same day the province announced increased enforcement of hunting laws, targeted mostly at hunters who use spotlights at night. A law passed by the legislature in 2018 that sets strict limits on the practice and makes it easier for conservation officers to lay charges took effect Friday.

Pedersen said there will soon be more officers in the field.

"There will be increased aerial surveillance. We're making sure we've got boots on the ground. There's a variety of measures," Pedersen said.

The Metis federation and the Progressive Conservative government have been at odds for years over hunting rights. In 2017, following the deaths of two men in night-hunting accidents, Premier Brian Pallister said night hunting was dangerous and leading to a "race war."

He later said he chose his words poorly but defended the drive to curtail spotlight-hunting.

This report by The Canadian Press was first published Oct. 9, 2020