Numbers gathered by CTV News found out of nine major Canadian cities, Winnipeg has the second highest ratio of licensed dogs per person.

GOING TO GREAT LENGTHS TO CARE FOR DOGS

Winnipeggers are willing to go to great lengths to care for their furry friends.

Once a month, an acupuncture treatment relieves Jake the border collie’s discomfort and helps him walk.

Jake, who is now 13, has been by Father Phil Daley's side since he was a puppy.

"He loves this. He wants to come to back," said Daley.

Easing muscle strains, nerve dysfunction and osteoarthritis, services once just for people, are now for dogs too.

"This is my way of paying him back for a life time of devotion,” said Daley. “If I can make things more comfortable, less painful, I'm grateful to do it.”

Winnipeg’s love affair is stretching onto the yoga mat. Teacher Holly Pluchinski set up what she's calling the first ongoing dog yoga class in the city.

All the benefits of yoga for people and dogs apply – lower blood pressure, increased mobility and relaxation.

"Dogs like yoga has much as humans do. They like that people are down at their face level, they're on the floor with them. They think it's a playtime opportunity so we are giving them that safe space to play with other dogs, other people and their own human," said Pluchinski. 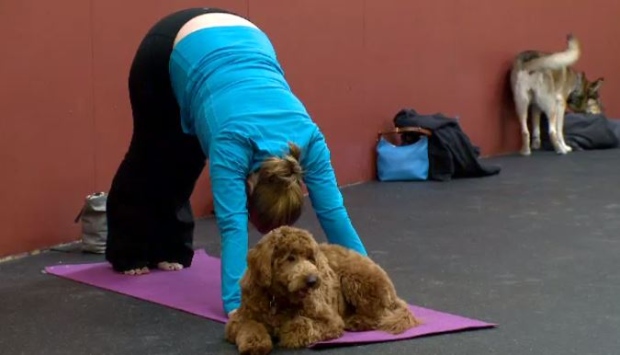 More Winnipeggers are willing to give stray dogs a second home, according to the City of Winnipeg.

"More people are energized to adopt a dog when they are ready to bring a dog into their family,” said Leland Gordon with Winnipeg Animal Services. “Versus the olden days where people are just going to breeders.”

Jasmine Colucci adopted Fozzy from a Northern First Nation three years ago when a rare condition left him unable to open his mouth and struggling to eat.

“The vet did some x-rays, ruled out tetanus, ruled out everything. They were stumped,” said Colucci.

She helped fundraise $10,000 for a 3D reconstruction of his jaw, and a unique surgery.

Doctor Colleen O'Morrow is the only veterinary dental specialist putting braces on dogs in Winnipeg.

O'Morrow figured out the problem, performed the surgery, and changed Colucci and Fozzy lives forever.

“It was just unbelievable and he recovered so well. Just the neatest dog," said O’Morrow.

"I would have syringe fed him the rest of his life. I have him tattooed on me now. He's worth it," said Colucci.