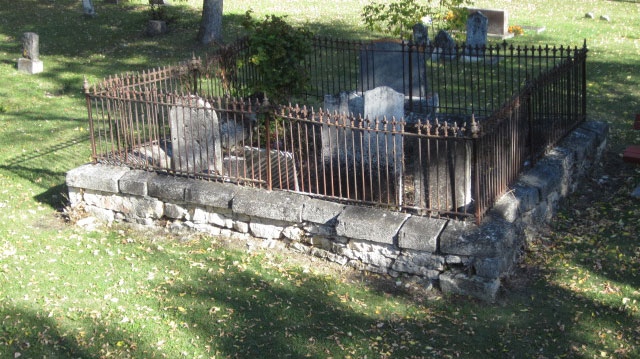 One of the oldest cemeteries in Manitoba is calling on members of the McKenzie family to help restore a historical grave site. (Source: Judy Rekrut)

One of the oldest cemeteries in Manitoba is calling on members of the McKenzie family to help restore a historical grave site.

Chief Trader for the Hudson’s Bay Company Roderick McKenzie his wife and a couple of their children were laid to rest in Little Britain Cemetery located along the Red River south of Lower Fort Garry. The cemetery says the first known burial was Catherine McKenzie daughter of Angelique and Roderick McKenzie in 1851.

Roderick and Angelique were both buried next to their daughter after they passed away in 1859. The McKenzie’s youngest son James was also buried there. Engraved on his headstone it states,

“In Memory of JAMES youngest son of Roderick and Angelique who was frozen to death January 2, 1860 aged 28 years.”

The McKenzie burial plot resides in front of Little Britain United Church surrounded by an iron fence and stone wall. The cemetery said the rough winters have caused the two-inch limestone headstones to deteriorate.

The cemetery began renovations this fall as they feel another winter would have completely destroyed the site.

“If we didn’t do something this year or next it would be beyond repair,” said chairperson for the cemetery Judy Rekrut. “Another winter and it probably would have just collapsed.”

Rekrut said Little Britain United Church was built around the cemetery in 1874. With over 1,500 grave sites the cemetery is still used today.

Rekrut said they are hoping to get enough McKenzies to raise the estimated $20,000 needed to restore the burial site. They are replacing the iron fencing originally from England and the stone wall that has partially collapsed.

“We are appealing to the descendants of the McKenzies, community groups, heritage and archival organization for financial assistance with the intention of undertaking the restoration process in 2018,” the cemetery said in a release.

Rekrut said if each descendant across Canada donated $5.00 they would have enough money to cover the repairs. She said the cemetery is a piece of Manitoba history and is a great place for people to visit.

Little Britain Cemetery started some of the restorations towards the beginning of the October before winter hits in hopes to have the repairs completed by next summer.