Algae appearing at beaches across Manitoba

With the hot weather Manitoba has been experiencing this week, many people have been heading to the beach to cool off, but this week there's been a colourful surprise.

Blue-green algae bloomed at many beaches along Lake Winnipeg, including Victoria Beach.

"It looked like there were like chunks of green floating in the water," said Gabby Lawrence from Victoria Beach.

On Friday, Lawrence headed to Victoria Beach with her friends Helen Black and Jessie O'Leary, but she said she was staying out of the water.

"It's gross, like it feels like you're swimming in soup, and it gets in your bathing suit, and it's just gross." 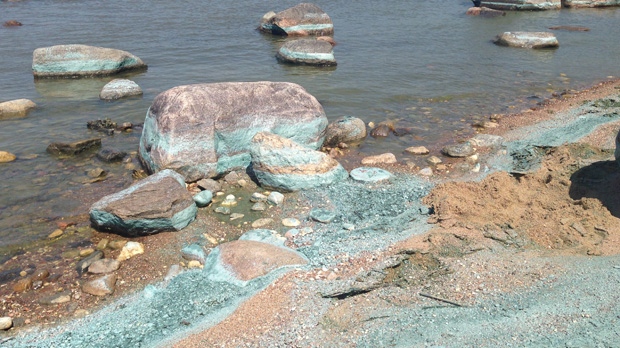 O'Leary has been coming to this beach since she was a child, and said this isn't out of the ordinary.

"It usually happens, I'd say, around this time every summer, which sucks, but I'm kind of used to it at this point."

The province said to avoid swimming where blooms are visible, and don’t let your pets drink water along the shoreline.

Lake Winnipeg Foundation said the root causes of algae blooms can be addressed by reducing phosphorus flowing into the water from sources like agricultural runoff, municipal sewage treatments, and city streets.

"There is more and more frequent algae blooms and particularly a dominance of blue-green algae, which is the algae that can sometimes produce the toxins that are dangerous to humans and animals,” said Alexis Kanu, executive director of the Lake Winnipeg Foundation.

This week, the federal government announced $25.7-million in funding for Lake Winnipeg. It's money that the Lake Winnipeg Foundation said can help address phosphorus hot spots.

For now, beachgoers like Michelle Axworthy are looking to the colour of the water to decide whether to go swimming.

"It's not covered in algae, and other days sometimes you can't see through the water, but today there's just a slight green tinge, so it's fine for us," said Axworthy.

Home and cottage owners who use lake water as a source of drinking water are being advised by the province that small treatment systems are unable to remove algal toxins. The province said to avoid drinking or using water for domestic purposes if you are in an area with blue-green algae.