Man ticketed for walking next to friends on sidewalk 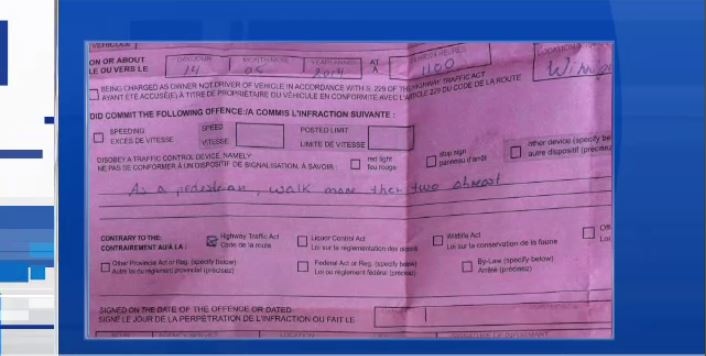 Winnipeg police issued a man a $113.10 ticket for walking on the sidewalk in a group “more than two abreast.”

Winnipeg police issued a man a $113.10 ticket for walking on the sidewalk in a group “more than two abreast.”

“I’ve walked past people four or five abreast. Why only give him a ticket?” said Chris Herda, a friend of the man who received the ticket.

Herda took his frustrations online and posted a picture of the ticket on Facebook.

That image had been shared more than 1800 times by Saturday morning.

The ticket was issued under Section 143 of Manitoba’s Highway Traffic Act which reads, in part:

"Any pedestrian proceeding along a highway where no sidewalk is provided or where the sidewalk is not passable, shall walk as closely as is practicable...but persons walking on a roadway shall not walk more than two abreast."

“I personally didn’t know it was law,” said Herda. “I don’t think anyone else knew it was a law either.”

According to Herda, the ticket was handed out on Portage Avenue in front of Portage Place Mall.

Winnipeg police told CTV News the ticket was issued for the wrong offence and has been voided.

According to sources the man has since been issued a new ticket in relation to the incident and the most recent one is for a liquor offence.