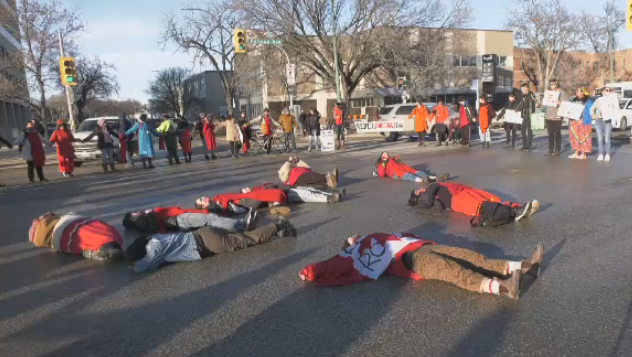 Around a hundred protesters took a stand Monday night in Winnipeg by lying down in the middle of Portage Avenue at Dominion Street. They held a so-called ‘die-in’, lying down outside RCMP headquarters and blocking traffic during the evening rush hour. The demonstration was called after the arrests Monday of Mohawk pipeline opponents in Eastern Ontario.

“We’re seeing settlers supporting Indigenous people who are seeking sovereignty and land back, and think that is all coming together now,” said Anna Weier, another protestor at the event.

Clashes erupted Monday morning near Belleville, Ontario when OPP moved in, dismantling a rail blockade set up by Mohawk protestors in Tyendinaga. The barricade went up in support of hereditary chiefs in Wet’suwet’en in B.C. who oppose the construction of a natural gas pipeline.

The OPP said they arrested demonstrators who ignored a court injunction and defied a midnight deadline to leave.

“We really don’t like seeing on video our people being intimidated and bullied from their own territories,” said Grand Chief Jerry Daniels of the Southern Chiefs Organization. “Canada’s systems have failed and they’re continuing to fail as long as they think they’re just going to push things through us.”

Marc Garneau, the federal Minister of Transport, said the blockade had to come down after it choked off rail traffic across Canada and caused shortages and delays.

“We are committed to reconciliation and we are committed to sitting down and having a dialogue over the specific problem that exists at the moment with the Wet’suwet’en,” he said. “But at the same time the barricades had to come down because it was having a profound effect on the economy.”

The protest at Portage Avenue and Dominion Street lasted around an hour. Demonstrators are vowing to hold another rally downtown Wednesday afternoon.