Train with 13 people on board derails west of Portage la Prairie, Man.

WINNIPEG -- A Via Rail train with 13 people on board derailed near Portage la Prairie, Man., on Tuesday morning.

A spokesperson from Via Rail said the train derailed just before 6:45 a.m., due to an “unexpected incident.” The people on board -- which included eight passengers and five crew members -- were looked after by first responders, it said.

The train involved, #692, travels south from Churchill, Man., to Winnipeg, a trip that typically lasts just under three days, according to the Via website.

Alex Fournier, a spokesperson with the Transportation Safety Board, said the train was reported to be travelling at around 100 km/h when it crashed.

“There was two locomotives and one coach car,” said Fournier, noting injuries were reported.

A Via Rail spokesperson said two passengers and three crew members were taken to hospital for medical care, but all have since been released.

Via said only the two locomotives tipped onto their sides, while five rail cars stayed upright.

Highway 350 at Road 73N in the community of Katrime was closed as a result of the incident. The roads reopened Wednesday.

All passengers were taken to Winnipeg by bus, Via said. 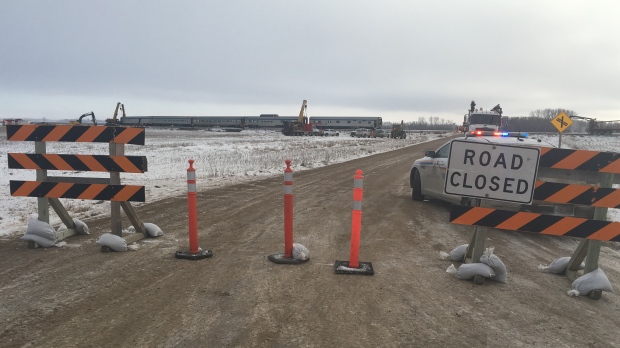 Via Rail is working with authorities to investigate the cause of the derailment.

The TSB said an investigator has been sent to the scene of the derailment.

“The investigators will go in the field to gather as much data as possible on the occurrence,” said Fournier, explaining that will include taking photos, gathering data from the locomotives and conducting interviews.

“Speaking with the police, in this case with the railroad company Via, and it’s a CN track so they’ll be in touch with CN as well.”

Fournier didn’t have information on how often passenger trains derail in Canada.

“They’re not a frequent occurrence,” he said.

LEAKED FUEL TO BE CLEANED UP, TRAINS CANCELLED

Via Rail said environmental crews are heading to the site to help clean up. It said it appears a “minimal amount” of fuel leaked from one of the locomotives before it could be removed. 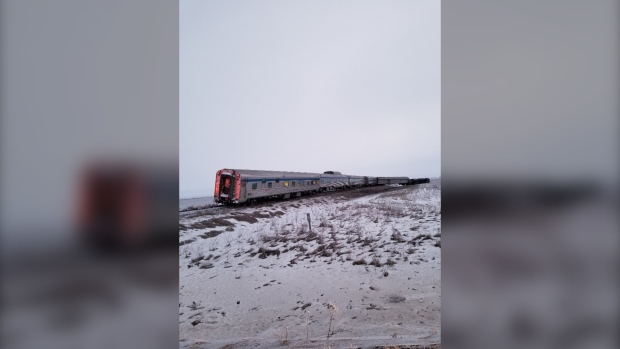 “This is an unfortunate situation and we extend our apologies to our customers for the impacts on their travel plans during this holiday season,” said Karl-Philip Marchand Giguere, a public relations advisor with Via Rail.

Steve Ash and Irene Way, who live not far from the scene, told CTV News they’re used to hearing trains go by.

“The horn went on normally, there’s usually three blows, two long, a short and a long as they go through the intersection,” Ash said, explaining this one “just sounded different, like it went by too fast.”

Way said Tuesday, the horn sounded for what she estimates was 30 seconds to a minute long.

“They knew they were in trouble, is what I think,” Ash said. 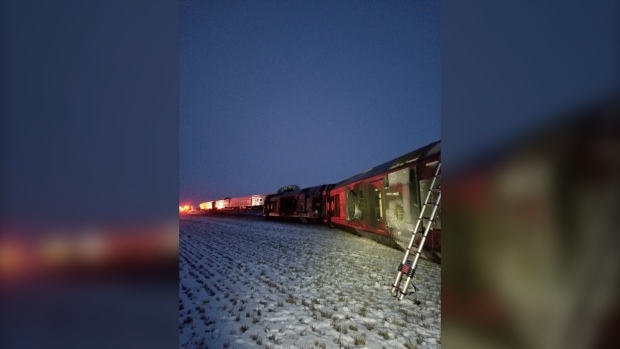 Way said sometimes the horn is sounded longer if there’s traffic around, so she didn’t think much of it.

They said they didn’t hear anything to suggest a train had derailed.

“It just seemed unusual. It wasn’t until I went on Facebook about an half hour ago that I realized there was actually a derailment a mile away from my house,” Ash said.

-With files from Touria Izri