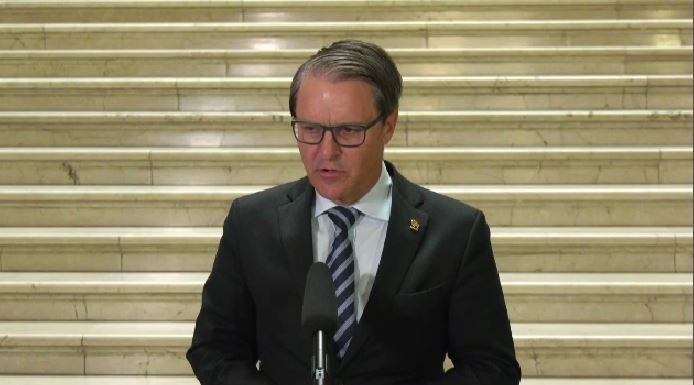 WINNIPEG -- Manitoba’s health minister delivered a message to Winnipeggers Tuesday urging them to take COVID-19 precautions seriously, as the number of cases jumped to a new high.

“I think that people have been lulled into a false sense of security following weeks and weeks of low numbers. Now we’re seeing that response is insufficient,” Cameron Friesen told reporters at the Manitoba legislature.

The province recorded 124 new cases Tuesday, the first time the COVID-19 count has reached triple digits in a single day.

Ninety-five of those infections are in Winnipeg.

The capital region also accounts for the vast majority of the province’s 1,248 active cases.

Friesen said while younger people may be less vulnerable to the effects of the virus, they run the risk of putting others in danger if they don’t take the necessary measures.

“People who fall into that younger cohort who are still intermingling too much should stop doing that. It’s time for them to take this seriously as well,” said Friesen.

The Winnipeg region is currently under code orange, the second-highest level in the province’s colour coded pandemic response system

“Everything we are doing right now is in order to prevent the idea of a lockdown,” said Friesen.

The health minister asked Winnipeggers to be patient with the code orange measures that came into effect two weeks ago. “Give this time to work.”

Friesen said Winnipeg can learn lessons from Brandon, which was placed under code orange in August.

The city managed to bring the number of infections down, after the province made masks mandatory and limited gathering sizes in the Prairie Mountain Health Region.

“That system was put to test in Brandon in its early days,” said Friesen. “We closed some things and we saw those numbers come back into line.”