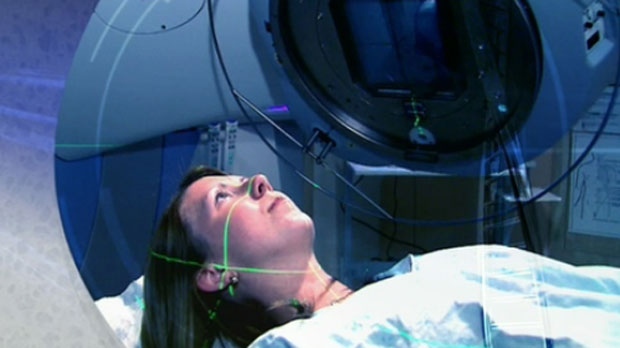 Known as a glioblastoma, it's considered among the "nastiest" of human cancers and is the kind of brain tumour diagnosed last year in Tragically Hip frontman Gord Downie. (File Image)

TORONTO -- A Canadian-led international research team is using a "barcoding" system to investigate the growth patterns of individual cells that make up the deadliest form of brain cancer, with the hopes of improving treatment.

Known as a glioblastoma, it's considered among the "nastiest" of human cancers and is the kind of brain tumour diagnosed last year in Tragically Hip frontman Gord Downie.

Each year in Canada, about 1,500 adults and 150 children are diagnosed with a glioblastoma, an aggressive tumour that is notorious for its complex genetic makeup and poor response to treatment. Glioblastoma has an average five-year survival rate of only about 10 per cent, and most people succumb to the disease within roughly 15 months of diagnosis.

But research led by the Hospital for Sick Children in Toronto and the University of Cambridge in the U.K. is taking a novel approach to better understanding how individual cells in the tumour contribute to its growth and what types of drugs might best target this highly invasive brain cancer.

"What we did here was we took human tumours, broke them up into individual cells and then we infected those with a short DNA sequence," said co-principal investigator Dr. Peter Dirks, a neurosurgeon and researcher at Sick Kids.

In the lab, every cell was tagged with a different DNA barcode, giving them a unique identifying marker, Dirks explained.

"That gets integrated into the DNA of that cell, and as that cells divide, all the daughter cells of that labelled cell share the same barcode. It's a very powerful way of just tracing the potential of each cell in the tumour."

These human glioblastoma cells were then put into the brains of specially bred lab mice and allowed to continue dividing to form tumours. When the tumours were removed, DNA from each cell was sequenced and their barcodes identified.

Using this cell-tracking strategy, the researchers found that only a small proportion of the barcoded cells could give rise to long-term tumour growth, suggesting that a large proportion of patient tumours contain cells that cannot multiply to make tumours grow.

They found that glioblastoma is made up of many different clones -- mini-cancers comprised of clumps of genetically identical cells within the tumour -- and most followed a growth pattern consistent with the stem cell model of cancer, in which a minority of stem cells are responsible for tumour growth.

Mini-cancers that followed this predictable growth pattern were dubbed Group A, while rarer and more aggressive clones that didn't were labelled Group B.

"Consider it like a marathon race, where all the competitors are together in the race," said Dirks. "The whole pack tends to move along, but there are some sprinters that go way beyond the pack.

"So we think there are some of those that are like rogue clones that really are bursting ahead of the others -- those are the Bs."

What's key about these findings, published Wednesday in the journal Nature, is they suggest a different way of targeting the brain tumour, which has a high rate of recurrence, despite treatment.

"A few years ago I was thinking, 'Oh, glioblastoma, it's genetically different from cell to cell, all these clones are mixing," he said. "If we just kill clone X, we'll leave behind Y and Z and they'll just keep going."

But the researchers have identified two existing cancer drugs that were shown to slow the proliferation of glioblastoma cells in lab mice, one that acts on Group A cells and the other against Group B.

"It's about promoting different types of therapies for cancer," said Dirks. "It's another step in cancer treatment, not targeting the one mutation but targeting the processes that facilitate the stem cell behaviour of cancer cells.

"It gives me hope that with this disease we're not going to need 20 different drugs to treat it, maybe we'll just need several that target the specific behaviour of these cancers within the cancer."

Dr. Alan Bernstein, president and CEO of the Canadian Institute for Advanced Research (CIFAR), said better understanding of the complexity of different kinds of cancer is critical to improving diagnosis and treatment.

"This paper brings a new approach and applies it to understanding the cellular composition of glioblastomas," Bernstein said in a statement. "This is an important advance ... and it holds promise for finding new ways to diagnose and treat a very serious human cancer."

Dirks cautioned, however, that there's still much more research needed before it's known whether these findings could lead to an effective therapy for patients with the devastating brain tumour.

"I don't feel as disillusioned as I used to," he said. "These kind of studies are still a ways away from the clinic, but it's given me new optimism."