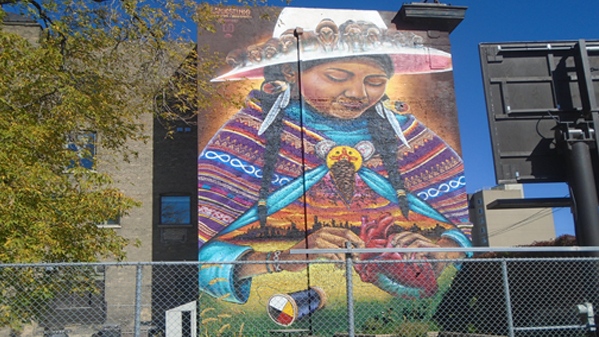 A five-storey mural on a Winnipeg church has been chosen Mural of the Year.

The creation titled Mending was created at 782 Main Street by Brazilian artists Bruno Smoky and Shalak Attack. The duo is a married couple that paints under the moniker Clandestinos.

The award is handed out by the Murals of Winnipeg website. It was voted on by 29 independent judges from 30 new outdoor murals from 2016.

The mural depicts a lone indigenous woman holding a sewing needle with a spool of thread and a human heart in her hands. It’s meant to evoke themes of Truth and Reconciliation and pay homage to murdered and missing indigenous women, a news release said.

This also marks the first time an all aerosol mural has won the award.

“We are so honoured by this award.” said Shalak. “It was just as much of an impacting project for us personally as well as professionally. It went deep and all the energy and experience was unforgettable.”