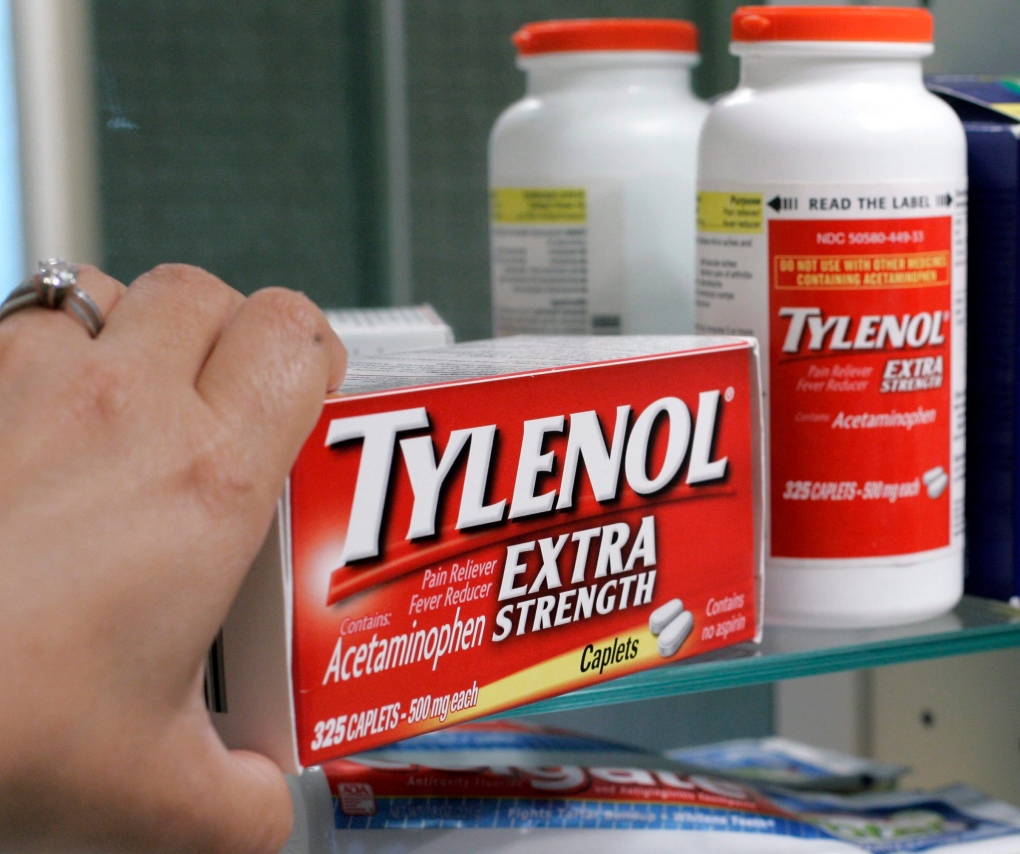 TORONTO -- Health Canada is contemplating new guidelines for acetaminophen, a medicine cabinet staple that many assume is safe but is actually the leading cause of serious liver injuries in Canada.

The department is reviewing the maximum recommended daily dose of acetaminophen. It is also looking at extra strength and extended release formulations, a Health Canada official said Thursday in an interview.

Dr. Supriya Sharma said Health Canada will be working with provincial and territorial partners on the issue, trying to determine whether some formulations ought to be moved behind pharmacists' counters.

Provinces and territories decide whether a product is sold over the counter or from behind the counter, she said.

In addition, Health Canada may require that all children's liquid medications that contain acetaminophen be sold with an accurate dosing device to minimize the risk of overdose.

Acetaminophen overdoses are responsible for an estimated 4,000 hospitalizations a year in this country. Health Canada says there are more than 250 cases of serious liver injury in Canada each year related to acetaminophen, and over half of those are due to unintentional overdose.

In fact, a recent federal report on acetaminophen found that the numbers of unintentional overdoses involving the drug are on the rise in Canada.

Acetaminophen is a commonly used fever suppressant and pain medication. It's best known as the drug in Tylenol. But it is also found in myriad other remedies sold to alleviate symptoms of colds, influenza and sinusitis. In fact, Health Canada says more than 475 products containing acetaminophen are licensed for sale and most are sold without prescription.

Dr. Michael Rieder, who holds a chair in pediatric pharmacology at Western University in London, Ont., said the federal government should look at those combination products and talk to manufacturers about the issue.

Acetaminophen may not add much benefit for the user in some of the combination products containing the drug, Rieder said. But consumers may not be aware that the cold remedies they are taking contain the drug, so they could take acetaminophen on top of the cold medication.

"Fifteen years ago in Canada, acetaminophen was just acetaminophen. We didn't have it in every other product known to man," he said.

Rieder also questioned the extra strength formulations, saying they may not carry added benefit but likely are a source of added risk.

Sharma said the department knows some chronic pain sufferers rely on extra strength formulations. She said Health Canada is trying to strike a balance between providing consumers with choice and lowering the risk the drug poses.

The department is also planning to change the labelling for products containing acetaminophen so that the language is clearer and the risks of misuse are easier to understand. A draft of the new labelling standards will be posted online later this summer.

But Dr. Muhammad Mamdani, director of the Applied Health Research Centre at the Li Ka Shing Knowledge Institute at St. Michael's Hospital in Toronto, said it is unlikely that labelling changes will take care of this problem.

Mamdani said the issue with acetaminophen is that some people can't metabolize it properly and for them, even a dose that is below the recommended daily maximum can be dangerous.