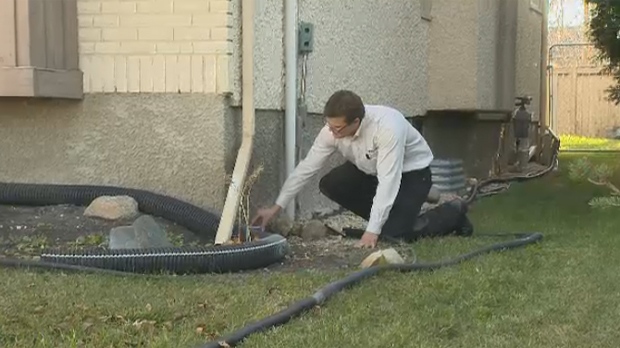 Lincoln Poulin sets up a mouse trap outside a house. He said calls about mice are up for this time of year because the warm weather means more mice are moving around.

While the warm weather has given Winnipeggers an excuse to get outside, local exterminators say it’s also giving pests a chance to get inside.

Lincoln Poulin of Poulin’s Pest Control said they have received twice the amount of calls for mice they would usually get this time of year.

Poulin said more young mice are surviving due to the mild temperatures, meaning there are more of the critters out in the wild moving around and searching for food.

A normal litter will have between five and eight baby mice in it, Poulin said.

“So with the warm weather, more of them are surviving. A female will have around eight litters a year,” said Poulin.

At this time of year, the mice would usually be nesting, but instead they’re finding their way into open air conditioning lines and through gaps at the bottom of doors, said Poulin.

“I can’t stress (enough) to people about sealing the outside of the building,” he said.

To protect their homes, Poulin said people can set up bait traps or snap traps around the exterior of the home and along fence lines.

Ultimately, though, he said it’s going to take a shock of cold and heavy snowfall to drive the local rodent population down.

- With files from Shelden Rogers